As a pest control technician, you want to be sure that you’re getting paid what you’re worth. After all, your job is no easy task. Every day you’re dealing with a variety of vermin, some more unpleasant than others. Your job is demanding and you deserve to get paid a fair salary.

And if you own a pest control business, you undoubtedly want to pay your technicians a fair salary while still effectively managing your costs.

In order to give you a sense of the average salary for a pest control technician in different locations, we scraped data from thousands of job postings on Indeed.com, sorted it, analyzed it, and present it here for you.

This should give you a sense of the pest control industry as it currently stands.

*Note: this data includes all positions and levels of experience, from someone just getting started in the industry to a technician with years of experience.

Looking a bit closer at the data, the state with the highest average hourly rate is

The state with the lowest average hourly rate is

Utah, where job listings show an average pay of $13.65

While looking at the big picture of the pest control industry is helpful, zooming in to the state level can give you a better sense of what the industry looks like on a state-by-state basis.

What follows are the average hourly rates in each state.

As noted, this data includes both the high and low amounts and is across a variety of positions.

With that in mind, knowing the average hourly amounts (and combining those numbers with other data) should help you understand which states are paying the most and which are paying the least. 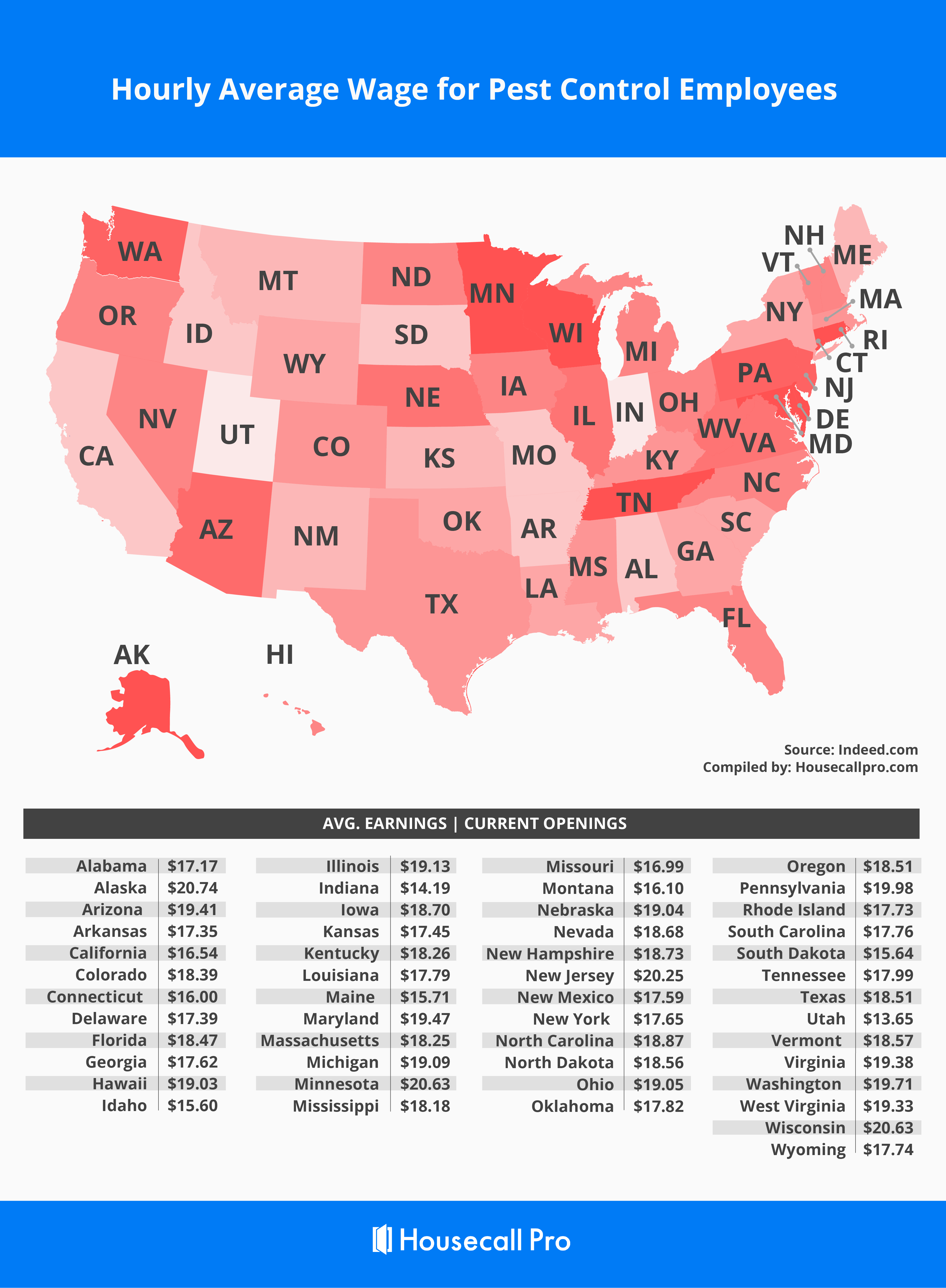 Another way of slicing the data is to look at the range of pay being offered. Since the average rate incorporates both the high and low numbers (which, at times, can skew the averages), looking at the full spectrum of salaries being offered can give you a better sense of what

This analysis gives us both the low mark and the high mark for what a pest control technician might expect to make in a given state.

on the low end all the way

(Virginia) on the high end. 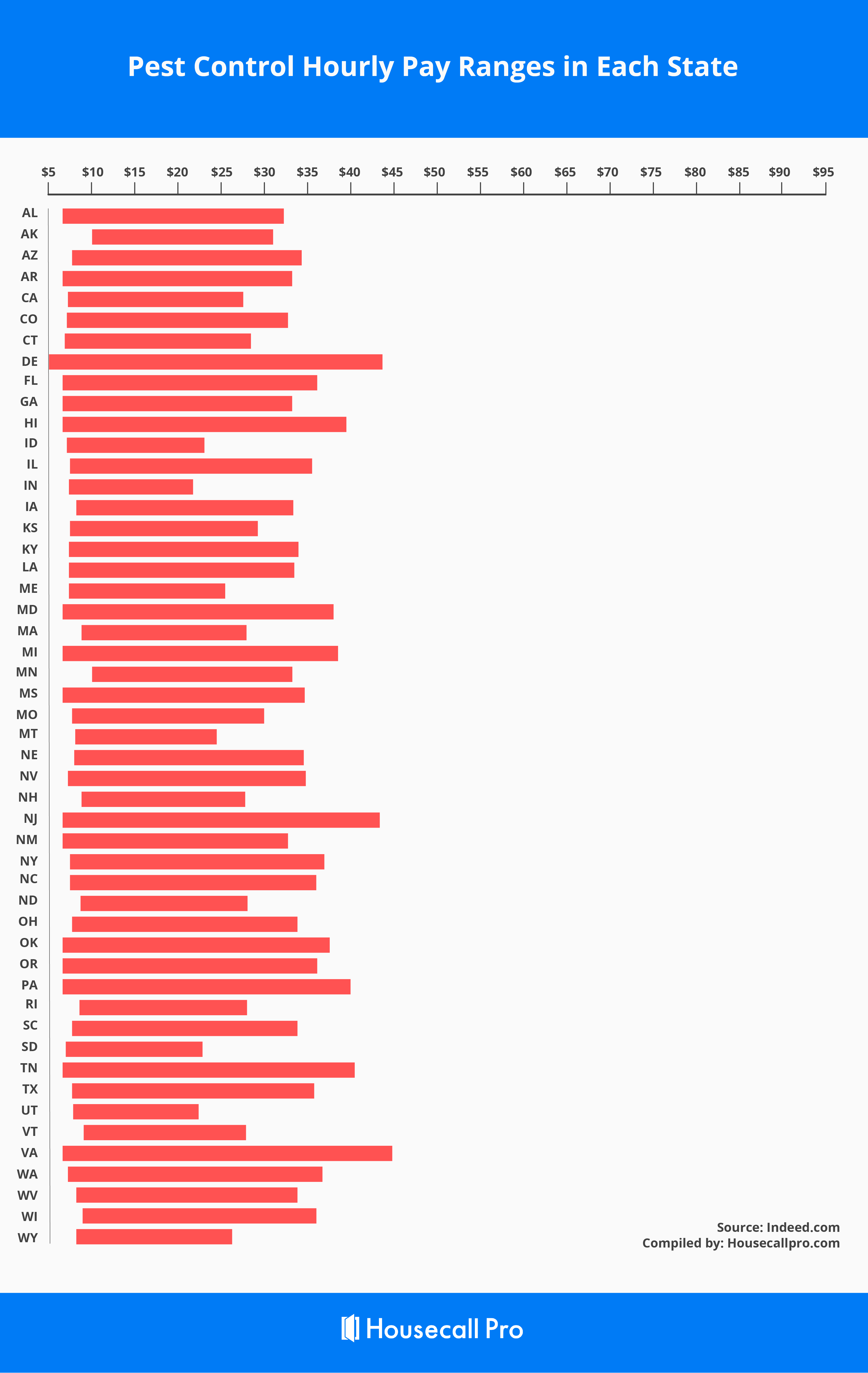 Here is a breakdown of the salary ranges in each state found in our analysis.

When we only look at hourly rates, it can be difficult to get a sense of what sort of annual salary a pest control technician might make. A bit of math is required to figure out what an hourly salary looks like on a per annum basis. Translating the hourly rates into annual salaries can give you a better sense of what you might get paid in a given year.

Based on the data from Indeed, we found that they segmented

into salary buckets. The highest bucket was for listings that advertised an annual salary of more than $55,000 per year. This was the data that we analyzed next.

of posted jobs within each state that average a salary of more than $55,000/year. We also list the

of all the jobs listed in each state that have a salary greater than $55,000/year.

Note: there were several states for which we could not obtain the necessary data.

Florida has the greatest total

with 185 total listings. However,

Alabama has the highest 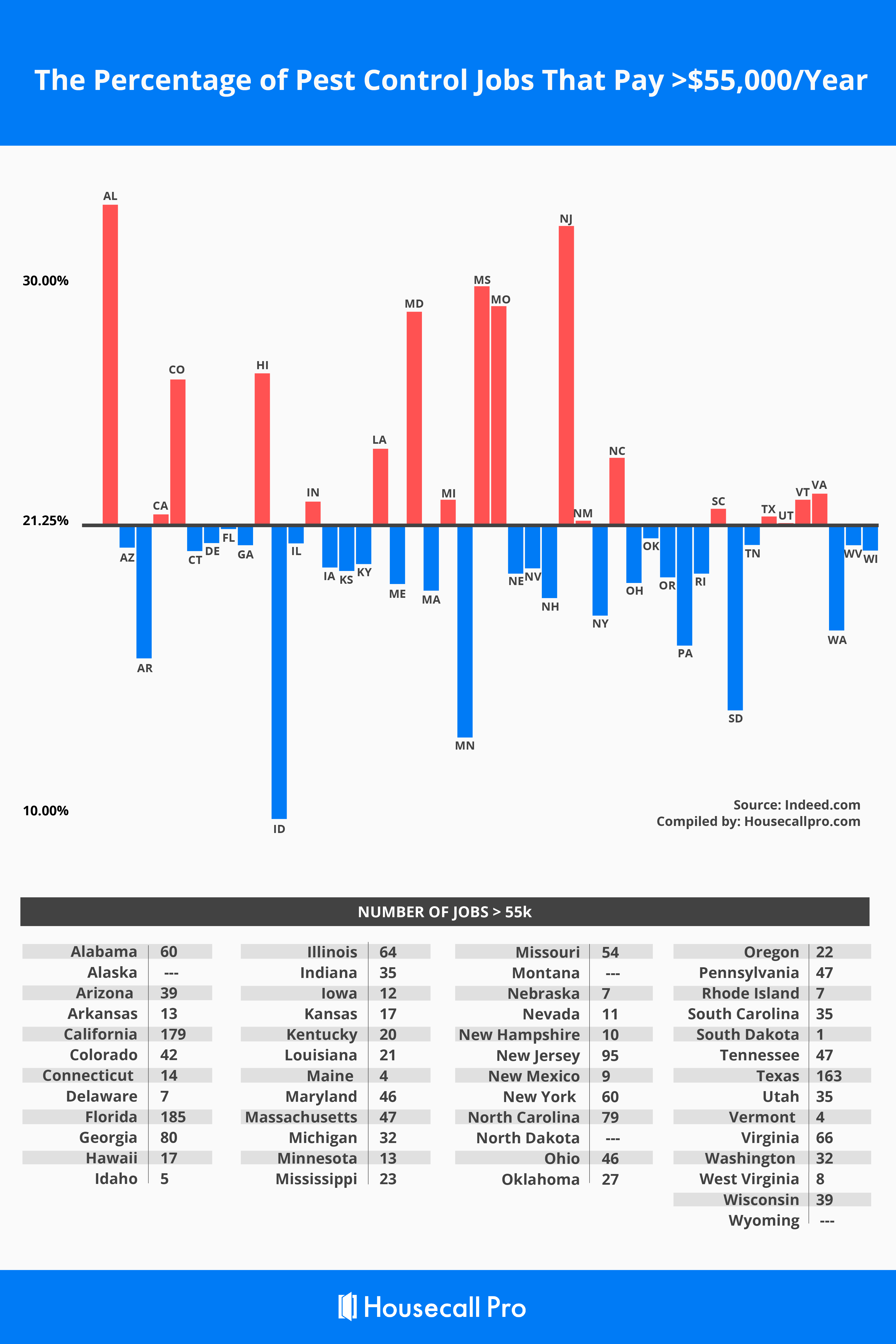 Cities With The Highest Pest Control Salaries In Each State

Within each state, there is generally a large range of pays, with the pay often being based on the cost of living in a particular area. The reality is that positions in bigger cities tend to offer higher salaries than those in more rural areas.

This implies that as a pest control technician, you may want to go a step beyond simply looking at nationwide and statewide salaries. It may be helpful to look at salaries offered in particular cities to get a feel for what is offered in more densely populated areas.

In addition to determining which states pay the highest average amount, we also determined which cities within each state pay the most. In other words, if you are a pest control technician working in that city, you’re probably making more than most other technicians in your state.

While this data primarily represents

throughout the United States, it does reveal a significant amount of useful information.

With the average salary being approximately $36,200/year (with many jobs available

that amount), it demonstrates that

is a relatively well paying job.

While there is certainly a variety of salaries across the states, clearly, the pest control industry is doing well. And as long as pests are a problem, there will always be a need for pest control technicians.

Additionally, if you own a pest control business, this data can be helpful when it comes to setting competitive salaries, evaluating your personal salary, and determining what sorts of pay increases you might be able to expect in the future.

The Most Common Pest Problems In Every State (With Data)