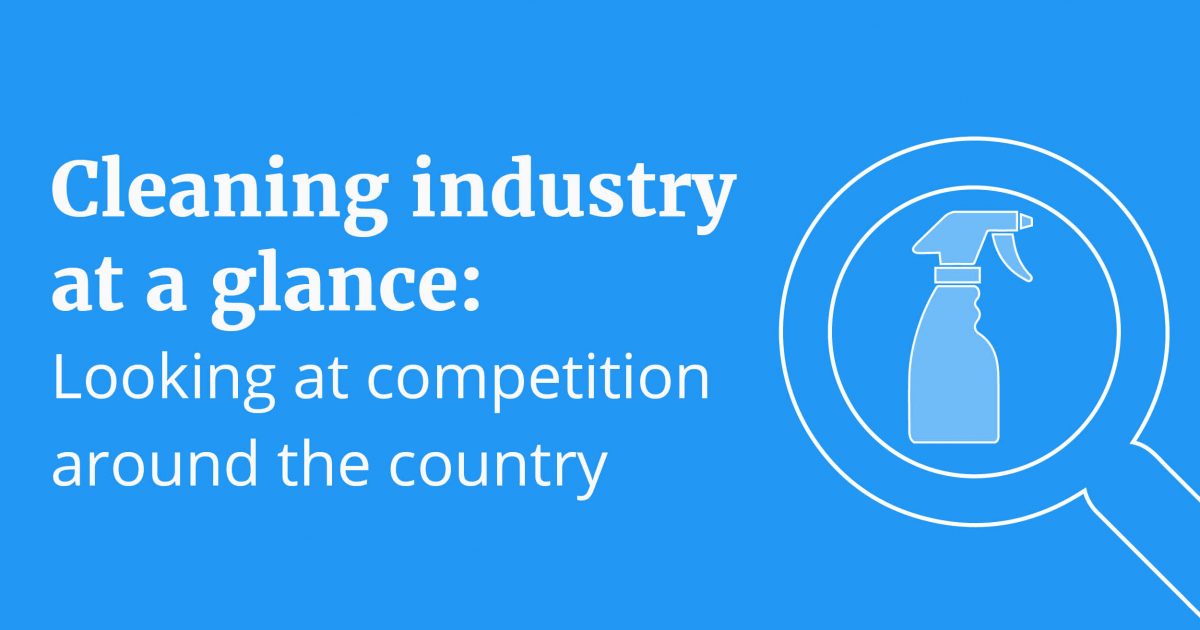 Cleaning Industry Competition Around The Country

The cleaning industry is not for the faint of heart. Every day you deal with messes, refuse, and straight up garbage. You have to invest a lot of blood, sweat, and tears in order to run a highly successful cleaning business.

If you’re planning on starting a cleaning business, expanding an existing one, or trying to get a job in the cleaning industry, it can be very helpful to know what the existing competition is like.

That’s where we come in. We scraped data from thousands of businesses on Yelp, sorted and analyzed the data, and present it here for your consideration. We determined which states had the most cleaning businesses overall, which have the most relative to the population of the top five cities, and which particular businesses have a significant number of cleaning businesses.

We’re the best solution out there for your needs

You won’t find a better software for the your business. At Housecall Pro, we’re constantly evolving our product to offer all the features you need to make running your service business easy. You’ll get great support from the Housecall Pro team, as well as 15,000+ Pros like you in our active social community.

The States With The Most Cleaning Businesses

First, let’s look at the states with the most overall cleaning businesses. This can give us a sense of where the cleaning industry as a whole is thriving, as well as which states have a significantly less booming industry.

Second, if a state has a number of large cities, such as Arizona, this also drives up the demand for cleaning services. More large cities means denser population centers, which in turn means more need for cleaning.

If you’re considering starting a cleaning business, you may want to consider two factors. States with larger populations have more demand for cleaning services. However, they also have more competition. Ideally, you want to start a business in a state with a large population and relatively small competition.

If you’re looking for a job, you may want to consider looking in states with larger populations. Yes, the competition for jobs will also be higher there, but there are so many more jobs available than there are in smaller states like North Dakota.

When it comes to hiring cleaning technicians, you’ll find that there’s more competition in states with fewer

businesses. Because there are so few plumbing jobs available in states like Wyoming, we should expect to find the competition for those jobs to be relatively high.

But this doesn’t give us the full picture. We also need to look at the concentration of cleaning businesses relative to each state’s population.

States With The Highest Concentration of Cleaning Businesses

Looking at the states with the highest concentration of cleaning businesses gives us another picture of the cleaning industry.

This data is a bit more difficult to interpret. However, we can make educated guesses about some of the data points. As noted above, the number of businesses (and overall concentration) in New Jersey is relatively high. This can most likely be attributed to the fact that New Jersey sits close to New York City and many businesses in New Jersey also service New York City.

The same can be said of Maryland, which sits close to Washington, D.C. In addition to cleaning businesses servicing large cities like Baltimore, many also service Washington, D.C., which increases the overall concentration of businesses in the state.

Other states, such as Delaware, while having a smaller population, do have some large cities, such as Wilmington. This, in turn, drives up the number of cleaning businesses and the overall concentration score.

Smaller states, such as South Dakota, have relatively small populations, thus driving down the concentration score.

However, before you choose a state in which to start a cleaning business, we also need to look at the concentration of businesses in particular cities.

Cities With The Highest Concentration of Cleaning Businesses

Looking at the top 10 cities with the highest concentration of cleaning businesses gives us yet another picture of the cleaning industry. The same goes for the bottom 10 cities.

But a closer look shows that both of these cities sit relatively close to Washington D.C., which has a much higher population than Rockville and Bowie. This, presumably, pushes the cleaning needs much higher. Additionally, with the government itself sitting in D.C., the cleaning needs are even higher still.

Other cities, such as Barre, Vermont, are a bit more difficult to interpret. It’s not clear why there is such a high concentration of cleaning businesses in such a small city.

On the other side of the coin, other cities relatively small cities such as Sioux City, Iowa, have very low concentration scores. Again, these cities are also rather difficult to interpret. It’s not clear why the city has such a low number of cleaning businesses relative to the population.

Then there are those businesses which have relatively high populations and relatively low concentration scores. Memphis, which has a population of almost 700,000 is a prime example of this.

Several key findings emerge from this data. First, it’s not enough to simply look at the number of businesses in a given state. In order to truly determine the competition, you must also look at the concentration of those businesses. If you want to start a business, you want to consider states that have a relatively high population and relatively low concentration score.

If you’re seeking a job in the cleaning industry, you may want to consider looking in a state with a larger population. Significantly more jobs will be available in these states than in states with smaller populations. For example, California will have many more jobs available than North Dakota.

A quick note about our methodology for calculating the above numbers. First, we scraped data from thousands of businesses listed on Yelp. Then we totaled the population of the top five cities in each state and divided the number of businesses by the population total. This gave us a “concentration” score which represents the density of cleaning businesses in a state. Finally, we multiplied that concentration score by 100,000 to give us a number that is more easily comparable between states.

At its core, running a business fundamentally boils down to two things. First, you need to know and understand the problems your customers are facing. Second, you need to be able to provide effective solutions for those problems. If you can accomplish those two things, you have a solid foundation for a successful business. The…

Offering financing options allows customers to sign on for necessary work they otherwise couldn’t afford. it also means you can take on more jobs than before.

To help you out, we scraped data from thousands of electrician jobs posted on Indeed and compiled the data, analyzed it, and present it here for your consideration.

Even if you’re using the best carpet cleaning pump on the market, failing to supply it with the proper power is a mistake.