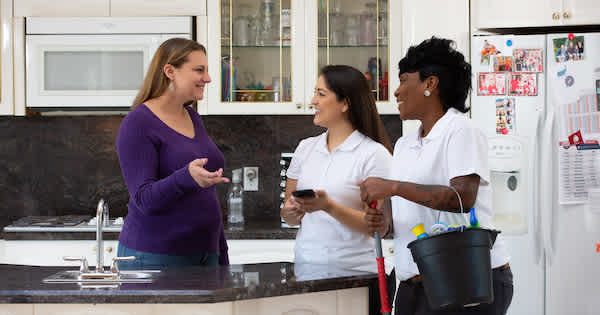 Founder Angela Finley was already running a home health business when she decided to start a cleaning company. Working inside people’s homes who needed at-home-care, she saw an additional need that wasn’t being met in her local area of San Leandro, California.

Angela couldn’t officially offer cleaning services through her existing business. There are strict industry regulations about what health care professionals are allowed to do. So Angela decided to form a sister company that would do strictly cleaning, and not just for her existing clients.

About starting a second business, Angela explained, “It gives me an opportunity to not just provide quality care, but quality cleaning services as well.”

Starting a business the second time around, Angela knew what to do to ensure a quick success. And weeks before the official launch of Superior Cleaning on June 24th of last month, the business already had repeat customers and was employing 15 cleaners.

How to get customers before you start your business

What follows are the tactics Angela used to launch her new business and tips on how to try out these same strategies on your own cleaning business.

Housecall Pro sponsors local meetups around the U.S. that offers chances for trade professionals to network with each other and share resources. When Angela was still in her 14-day trial of our platform, she found out about a meetup in Oakland, California.

“It was one of the best things I could have ever done. I enjoyed the interactions with everyone there from beginning to end, and connected with a lot of individuals. People were so open and willing to share their experiences.”

One person Angela talked to was Lora Messeret, owner of HSR Air Duct and Gutter Cleaning. Lora gave Angela her business card and told her to reach out if she needed anything.

“She actually took time after the meeting. We sat down, and she gave me a lot of information, wrote her phone number and email down … and maybe a week or two later, Lora sent me a client through Housecall Pro.” That person, in turn, referred more friends to Angela’s service, again, well before her official opening.

Reach out to people you know

Many business owners shy away from involving their personal network, which includes not only friends and family, but also other business contacts you have. But the people who know us personally are usually very ready to help.

One of Angela’s best friends is a property manager. Right away she asked to become the official cleaning service for his properties.

She also sent emails to people in her network asking them to refer her company. Referrals can have a ripple effect, extending well beyond the people you know personally. Angela explained that sometimes it’s not about who you know, it’s about who they know.

“In business, you advertise before you open your door,” Angela explained. “You need to be out there!”

A lot of owners can be timid about promoting their new business until they have everything figured out. But a slow launch can help you work out the kinks before you get busy, and one of the perks of starting a cleaning business is that the tools to get started aren’t that expensive, so you can begin to see customers right away. Promoting early also helps you build buzz around your business.

Before her grand opening, Angela began advertising on Facebook and Instagram. She talked to real estate agencies, visited job fairs, and even a commissioner’s meeting to hand out flyers. She offered folks a discounted trial cleaning. People who called to set up a trial service earned anywhere from 30% off to a completely free trial cleaning.

Not only did people sign up, but they began referring their friends. “I’ve gotten a lot of feedback in regards to people who knew people, who needed the service,” Angela said. “One lady said, ‘I have currently have a cleaning service that comes in, but I want to give you guys a try.’ So she gave us a try, and then she referred one of her friends after that.”

Simply putting your name out there isn’t enough to attract and keep customers. Much of Angela’s initial success is built on networking and referrals. But she built her brand and services around techniques she’s learned from running her home care business.

Potential clients interested in either home healthcare or residential cleaning can get in touch with a customer service representative at any time—day or night. She employs several specialists that work from home, answering phone calls, and emails around the clock.

As she began to advertise her new business, new potential clients have told Angela that her fast response-time to inquires sets her apart.

“Everybody works differently; everybody’s lives are different,” Angela said. “I’ve even had a lady say, ‘Your prices are really up there, but I can’t believe you’re up and ready to talk to me on the phone at 6:00 AM. That’s hard to find.’”

Even if 24/7 customer service isn’t practical for you, the key takeaway here is to be accessible to potential customers. Be ready to respond to inquiries quickly. Angela also utilizes HouseCall Pro’s online booking feature, so customers don’t need to speak to anyone in order to sign up for a cleaning.

The reason customers referred their friends to Superior Cleaning is because they were satisfied with their cleaning service. And that is because Angela’s 15 cleaners are good at what they do.

Finding quality employees is a big problem, and at the beginning of the business, everyone is new and unvetted. So how does she find the right hires? It’s all about the conversation.

When she’s interviewing a new employee, she asks them to read the company’s mission statement, and then she discusses their values.

“It’s important that they mesh with me and share the same values,” Angela said. She explained that she holds her cleaning crew to the same standards that she holds to her care team, and believes this makes all the difference.

Angela’s last tip is more of a mindset she uses to run her businesses: “We get into a frame-of-mind where we feel that people need us, so they’re gonna do business with us. People don’t need you. They have other options out there. You’re good, but there may be someone who’s great and don’t forget that.”

When someone gives her four stars, Angela asks what she can do to earn five the next time. She strives to always do better.

Learn what works for you

There’s not one right way to start a cleaning business, and you’ll learn what works for you. But one of the takeaways from Angela’s experience is that you don’t have to figure it out on your own. WIth networks in your local community, and the more than 18,000 pros in our online Facebook group, you’re never going it alone with Housecall Pro.

Whether you’re considering a new career path or growing your career into your own business, you may be wondering what the best way to start a cleaning company is. If you’re thinking about starting a residential or commercial cleaning business, we’ve got 10 critical things for you to think through to get started on the right foot.

Keep reading for a full overview or jump directly to the section related to your question about invoice terms.

Working in the HVAC industry can be a lucrative trade, especially if you’re a technician running your own small business. By investing a bit of time and resources, you can be your own boss, start a field service company from the ground up, and grow it at your own pace. There are some lessons you…

The statistics are in, and they’re pretty scary. Every year, homeowners lose thousands of dollars to HVAC problems. In fact, HVAC issues are one of the most common complaints among homeowners. Here are some of the scariest HVAC statistics we found. One in five homes in the United States has an HVAC system that is…

As your team expands further, your ability to make smart scheduling decisions will continue to play a huge factor in your success as a business owner. So, how can you do it better? Let’s take a look!

So your business is profitable, your team is growing, and you are ready to offer your services in a new market? That’s great, but now you have to make a crucial decision about which growth strategy is right for your business.

Let’s talk money. In this piece, we’ll look at strategies and business plans to boost your HVAC business profit margins.