How to Remove Bad Reviews From Google Local, Facebook and Yelp

How to Remove Bad Reviews From Google Local, Facebook and Yelp

How To Delete Negative Online Reviews

Online reviews can be the bread and butter of your business -- or the thorn in your side. One thing is certain: you can’t avoid them. People are turning to popular review sites like Yelp and Google to talk about their experiences. Unfortunately, customers are often more motivated to write a review when they have something bad to say.

If you’ve ever received an unflattering review of your business, you’ve probably wondered how to delete bad Yelp reviews or whether you can delete Google reviews with inaccurate information.

You won’t be able to scrub your profiles of all bad reviews, but that doesn’t mean you can’t offset the damage through positive action.  Plus, if you can prove a review is fake, most platforms will agree to take it down. Let’s talk about why negative reviews matter and when you can delete bad comments.

The Effect of Negative Reviews on Your Business

Negative reviews continue to affect potential business whether you acknowledge them or not. They’re like a bad rash -- if you try to ignore it, the issue just spreads and becomes more painful. The reality is that

say they trust online reviews as much as a recommendation from a friend.

found that losing just a single star (in a five-star rating system) can drastically limit how many people click on a business’s website. And

say they won’t buy from companies with negative reviews. Have we convinced you yet that reviews matter? Now let’s look at how you deal with a review that makes you see red.

For local businesses, Yelp is a major driver of business. Not only will Yelp let claim your business profile, but you can allow people to request an appointment directly on the app. That makes the platform a powerful tool for generating new leads.

On the other hand, if you’re on Yelp, fake negative reviews are hard to avoid. They can happen because a disgruntled former employee wants to make you look bad, a competitor is trying to give themselves an advantage, or because an unhappy customer decides to exaggerate to the point of being dishonest. There are a few ways to spot obviously fake reviews:

1. Mention of a competitor. If the conclusion of someone’s bad review of your carpet cleaning company is to tell people to go to a competitor...something might be fishy. Especially if they mention a discount (i.e. “This company sucks! Use ABC Carpet Cleaning with code CARPET20 for 20% off your first service instead!)

2. No matching job orders. Yelp only offers the first name and last initial of users. Still, between that and the type of service described in the review, you should be able to piece together which customer it is. If nothing shows up in your system, the review may not be real.

3. The reviewer is shady. If someone is going around Yelp leaving tons of bad reviews on Atlanta plumbing companies, they’re not using Yelp fairly.

they “... don't typically take sides in factual disputes and generally allow Yelpers to stand behind their reviews.” In other words: you can’t simply go onto your page and delete a bad review. And Yelp doesn’t frequently agree to do it for you.

If you have documented proof that a review is false, however, you may have some luck getting it taken down. You can also go to court and have the review deemed defamatory… but that is rarely worth the expense and effort. Before you can do anything, you should claim your Yelp business profile (yes, someone else can start a page for your business and run it behind your back).

To report a fake review to Yelp as the owner of the page,  you must flag it for review by their moderators:

A moderator will let you know if they are removing the content or not. In some cases, they may also ask for follow-up documentation or proof that the reviewer has violated the community guidelines. If you’re not satisfied with the response, you can also email Yelp with proof that the review is false or from a spam account (someone who goes around leaving tons of bad reviews).

Since Yelp is often hesitant to remove a bad review, your best bet is usually to respond to the negative comment publicly. Yelp allows businesses to respond as the owner of the business page. Be sure to look into the customer and what actually happened before you respond.

For instance, if John Smith says it took your plumber too long to fix his bathtub and he left the floor dirty, you can offer a response from the company that says:

“Hi, John. We’re sorry to hear that you were unhappy with how long it took to complete your bathtub repairs. We strive to do great work, and quickly, but it looks like an unexpected second leak caused this repair to take longer than we originally anticipated. Our company policy is to leave homes clean when we leave, so we apologize for the dirty floor and understand why you were frustrated. We appreciate the feedback and hope to earn your business again!”

The key to a good company response is to be empathetic, professional, and address the specific complaint. You should never be combative or defensive -- potential customers want to know that you resolve complaints with respect.

One final note about Yelp reviews: Yelp highlights the most useful ones and hides the others as “not recommended.” Users can click on a button to see these reviews, but they won’t show up on your main page. If a user creates a Yelp account just to leave you one bad review… the site is likely to parse it as unhelpful and hide it sooner than later.

A lot of people are using Google reviews now, and (as you can probably guess) they show up at the top of local Google searches. If you lose a bunch of stars for negative complaints -- it could literally be the first thing people see when they find you on their favorite search engine.

The rules for identifying fake Google reviews is similar to Yelp reviews. If you don’t recognize the customer, they leave a slew of 1-star reviews in a matter of days, or it looks like competitor sabotage, the review is fair game for flagging.

How do google reviews work? Customers can go to your business listing on Google Maps and leave comments and ratings. The most useful ones could be served up in search engines. As you can imagine, if you only have a few reviews, a negative one could do some serious damage to your online reputation.

Google also has a somewhat hands-off policy when it comes to moderating disputes between businesses and customers. Since they can’t know who is telling the truth if a customer says their food was cold, for instance, they stay out of it.

That being said, they have a list of content that can be flagged for removal by the business. 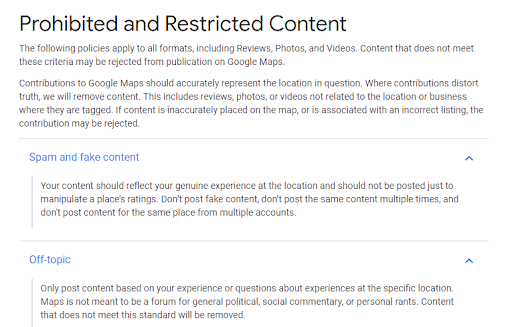 In addition to spam, fake content, and off-topic rants, Google also prohibits content like threats, impersonation, and conflict of interest (which includes former employees reviewing the business as an employer).

So, what do you do if you have a legitimate complaint?

1. From your computer, sign in to Google My Business and switch to the card view if you need to manage different locations.

3. Use the three-dot menu next to a particular review to flag it as inappropriate.

Since Google is unlikely to intervene in a run-of-the-mill negative comment dispute, a lot of figuring out how to remove bad reviews from Google Local (aka Google My Business) could involve communicating with your customer.

You never want to threaten or intimidate a customer, of course. But  if you write them and offer to resolve their complaint, they may agree to remove their negative comments. At the very least, they may post an update letting people know you reached out to fix the problem.

Finally, Google also lets you respond to negative Google reviews. If you can’t inspire a customer to take their comments down, you can dilute some of the damage with a friendly response that shows you care about getting it right in the future.

Facebook does a decent job of weeding out bad business reviews. Or, rather, what they consider bad reviews. Business reviews that includes hate speech or spam will usually be automatically deleted. But some fake reviews may still sneak through. And negative comments that don’t violate community standards will stand.

Facebook also differs from Yelp and Google in that you can disable reviews altogether. If you’d rather not deal with a particularly aggressive troll -- you can just shut down your Facebook reviews and allow people to communicate on your page’s feed instead (where you have more deleting power).

If you want to report a Facebook review because you think it does violate the community terms, go to the “Reviews” tab on your business page. Click on the word bubble with an exclamation point in the upper right-hand corner just above the review. Facebook will ask you why you’re reporting the review, and you can choose from several options: 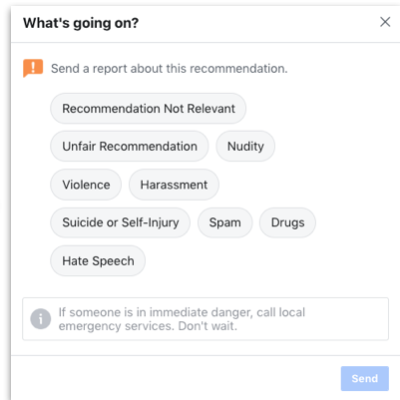 As we mentioned, though you can’t delete Facebook reviews individually, you can hide all reviews. Of course, this means people also can’t sing your praises. Think twice before you disable all reviews.

If you’ve thought about it and Facebook reviews just aren’t worth it, go to the “Settings” page for your business page. Choose “Templates and Tabs” and then the “Settings” button next to “Reviews.” From there, you can toggle the “Show Reviews” feature to “Off.”

Since you can’t delete every review you don’t agree with, you’re better off focusing on the positive than the negative. Here are some things you can do to combat a nasty review that you think is hurting your business.

1. Respond to all negative reviews quickly. Responding within a few days is better than waiting 6 months, which sends the message that you didn’t care enough to reply promptly or make it right.

2. Offer a phone number for follow up. Along with these other tips for

, offering to take it offline signals that you’re serious about rectifying the problem. For instance, you could end a response with “My name is [name] and I’m the owner of [business]. Please call me at [number] if you want to discuss this further.]

3. Encourage people to give positive reviews. You don’t want to pay people to leave reviews or have employees write fake reviews. But encouraging happy customers to leave good reviews goes a long way toward reducing the impact of bad comments.

such as CitySearch, BBB and ConsumerAffairs to help boost your online reputation.

If you’re struggling to gain a lot of online reviews, let Housecall Pro help! Maybe your customers just need a nudge to go online and leave a positive review. We can automatically send your customers a message requesting a Google review after each service call. Start

The Benefits of a CRM for Contractors: 9 Reasons Every Home Service Business Needs a CRM

How to Remove Vinyl Car Wraps (The Right and Wrong Way)