The overwhelming majority agree that it takes hard work, positive relationships, and a willingness to learn in order to be successful. In addition to these universal traits, each industry requires unique attributes in order to succeed.

the health, education, recruitment, and customer service industries. Very personal and human-oriented industries which have allowed women to show the world that they are

through clear communication, an openness to innovate, and effective goal management.

With that said, women are embracing their futures and capitalizing on

to rise in industries where they are traditionally the minority. Which industries have women on the rise and more importantly, what is the secret to their success?

[Data] Which Industries Have Women on the Rise?

Housecall Pro, after six years in the business, has compiled data from tens of thousands of past the current users to discover the true representation of women across home service industries. These are the industries found to have communities of women workers on the rise. 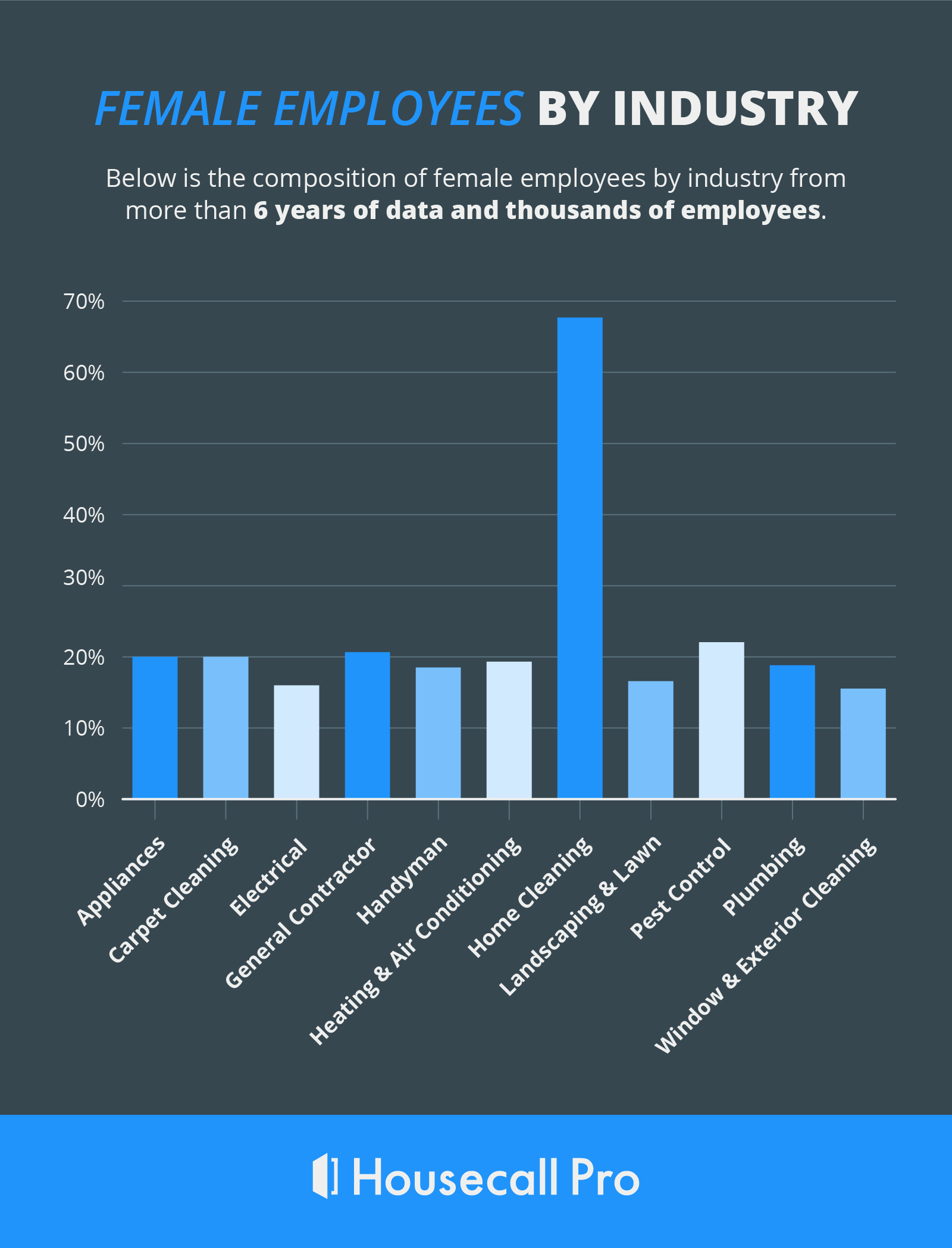 21% of Pest Control Employees are Women

The pest control industry is very important for the health, safety, and comfort of people worldwide. Pest control in the United States is booming (largely contributed to rising demand for bedbug, ant, termite, and mosquito control services) and projected to generate

This multi-billion dollar industry has proven to be a place of opportunity for women. Of the tens of thousands of accounts of past and current Housecall Pro users, 21% of employees working in pest control are female. Given this and the expectation of industry employment to

over the next eight years, women have the potential to capitalize on a growing field.

20% of Employees in Generating Contracting are Women

The construction industry is a major contributor to the U.S. economy, bringing in a total of

in revenue in 2019. This is largely due to improved household finances, easier access to credit and loans, and positive consumer responses towards building in general.

Housecall Pro reports 20% of its past and current users, are women who work in general contracting in some capacity. Women, while still a minority, have been on the rise in recent years.

In fact, the phrase and hashtag,

has gained enough traction to have its own presence on social media, as well as its own

. Coined to normalize the image of women in the construction trade, with men, to get the job done, it is proof of the rising female community within the industry.

19% are Employees in HVAC Industries

Heating and air conditioning are considered essential to a household’s quality of life and often is resistant to economic downturn because of it. Total revenue for

and employment is expected to be up

, however, with more workers reaching retirement age, the industry is seeing a

is one organization empowering women to grow their skills through education and mentorship. A membership includes scholarship eligibility, online course discounts, and a very active network of industry professionals.

capitalize on the opportunities

the industry is presenting. 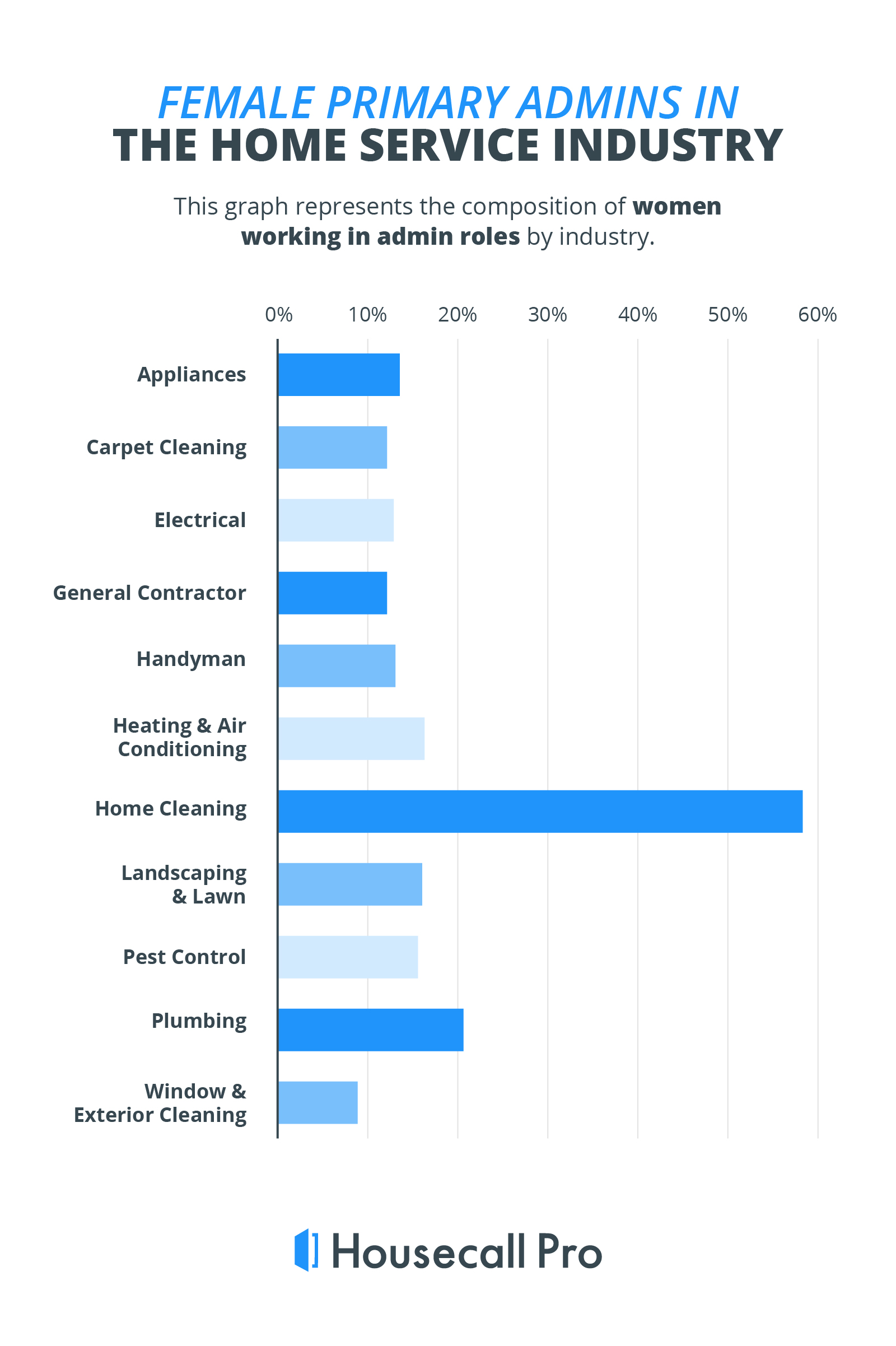 Let’s be honest. This is not surprising but it is still a great statistic to see. Of the tens of thousands of accounts of past and current Housecall Pro users, 58% of home cleaning businesses have women owners.

Home cleaning services have been an area of female domination for quite some time and with higher levels of disposable incomes and the average age of the U.S. population increasing,

is showing no signs of stopping.

20% of Plumbing Businesses are Run By Women

Housecall Pro reports that 20% of the plumbing businesses of its past and current users are owned by women. This

has undergone changes over the years and what has stuck has allowed women to create a space for themselves in an industry primarily associated with men.

The need for plumbers is ever-increasing and the growing population (and the number of toilets) only means more demand than ever. Modern advancements have also played a role and women are capitalizing on the internet and social media as a way to build a business, allowing them to thrive in some might say the unlikeliest of places.

What This Means for the Workforce of the Future

Lady Pros are on the rise in certain industries but are still the overwhelming minority in the workforce. But what significance does this rise have for the workforce of the future?

Well, when more women are in the workforce, the whole economy benefits.

In fact, it has been found that increasing employment and leadership opportunities for women can

improve the organizational effectiveness and growth of a company

so much so that if female employment rates in OECD countries were increased to match Sweden’s levels, GDP could

increase by over $6 trillion

Think on that for a second. Now, that is a large scale example with a large scale impact but the field services industry is not that far off. As more women break into the industry, thrive, and grow the industry as a whole, the better the U.S. economy will grow as well.

Although it has started slowly, the industry is poised to support the next generation of workers in a multitude of ways. 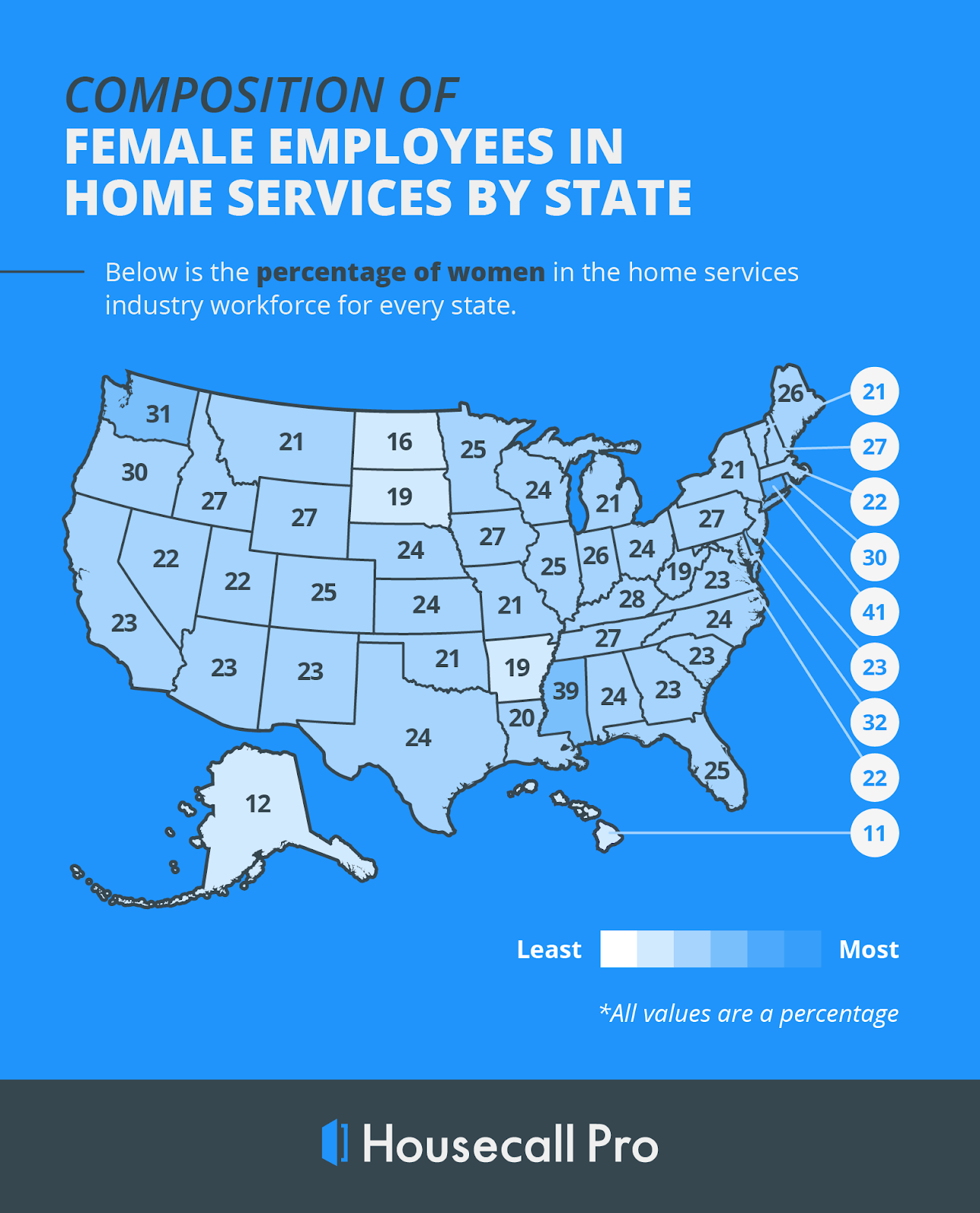 When female field service employees across all industries are broken down by state (using proprietary Housecall Pro data), we can see that certain states have higher and lower representations than others.

States with the highest percentages of female employees:

States with the lowest percentages of female employees:

With that said the

meaning most of the country has room for improvement in regards to attracting female employees to the field services workforce. How can states do this?

Lean into the gig economy and attract millennials.

There is no question that the field service industry is experiencing a talent shortage and a large part of that has been attributed to trouble attracting millennial workers.

Millennials just starting their careers are

. The last due to the emergence of the gig economy.

By leaning into the

, to manage workflows and create flexible training and working environments, millennials may begin to choose field services as their career at a higher rate. 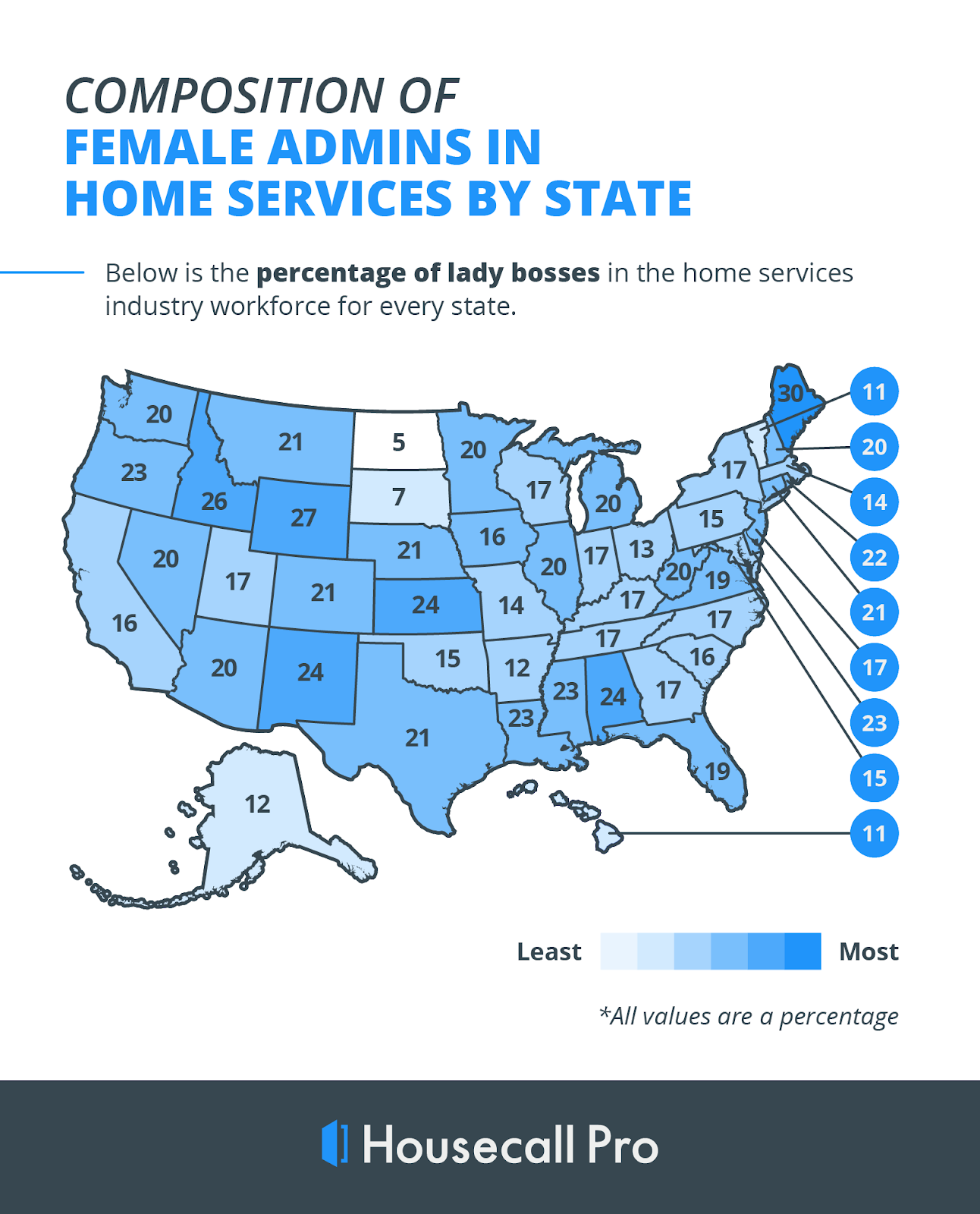 of all management positions in 2018 and similarly with female field service employee representation, we can see (based on Housecall Pro’s proprietary data) that some states have more female admins representation than others.

States with the highest percentages of female admins:

States with the lowest percentages of female admins:

How to Succeed and Rise to the Top

Interested in breaking into the industry? Not sure where to start? We asked the

for their advice and they did not disappoint. Here are the top three tips for success in the field services industry.

“Working in other fields for 20 years taught me great customer service and sales skills which have been the true key to my success and growth. Operating with the utmost professionalism and great communication skills.”

“I’m successful because I give the same respect to my potential and current clients the respect I would want from a contractor. I communicate extremely well, I’m honest, respectful, transparent and I do a great job. Plus, I think being a handy tradeswoman is helpful because many people are attracted to this and want a woman tradesperson in their home. Just speaking from experience.”

Top Tip #2 - Learn the Different Parts of the Business

“I started answering phones a couple of days a month. As far as succeeding in my career, I read a lot and I mean a lot of manuals, tech books, and any refresher course I could take. The excitement of wanting to be better, learning all the different things that involve heating and air.”

“Work! Focus on the job at hand. Put the cell phone down. Learn from the more experienced people. Learn your job and learn about other people’s jobs. Work hard and learn as much as possible. Don’t get involved in workplace drama.”

“What I’ve learned from this unexpected journey is that it is true - you can always remake yourself no matter what age you are - and that there are always all kinds of opportunities for us women if we are willing to take the risk either by choice or necessity.”

“Just DO it! Don’t overthink it, jump right in. Never stop learning. Be passionate about what you are doing. As a woman boss and fence installer, I get doubted from time to time. My best defense is a huge smile and a very strong work ethic. Focus on quality, really know your job and always be kind... that's how we can change the way some people see women in trades.” 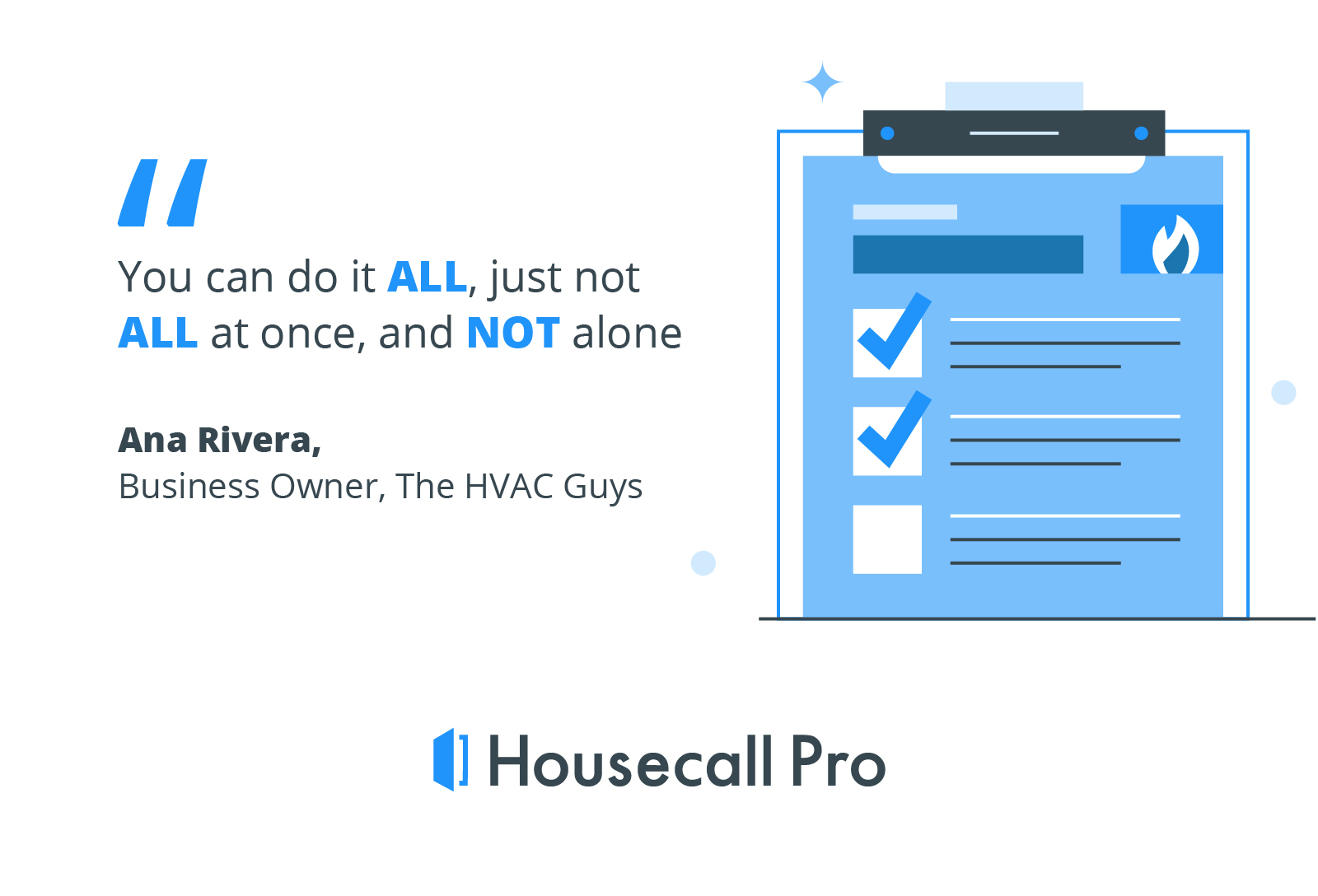 Women are embracing their futures through hard work and dedication, but it takes a community and time to succeed.

are one community that has become a global movement to unite and empower women of the trades to take pride in their craft, build a legacy and ignite change for future generations. With a few clicks, you can be

apart of this movement

In addition to the great work the Lady Pros are doing, here are a few fantastic female communities and resources to take your career to the next level:

The 7 Best DIY SEO Tools For Small Businesses in 2021