1 Out of 3 Invoices Don’t Match the Initial Estimates

1 Out of 3 Invoices Don’t Match the Initial Estimates

Have you ever had a job go over cost?

Turns out, if you have completed 3 or more jobs, chances are you have misquoted a project. Although most customers are justifiably fearful of projects going over cost, many of our projects stay within estimated cost and some even come in under estimated cost.

In this proprietary data study, we compared 1.1 million final invoices to their initial estimates, showing how many jobs stayed within cost, went under cost and went over cost. We also took a closer look at which industries were the biggest offenders. Continue reading or

jump to our infographic

for a visualization of the data. 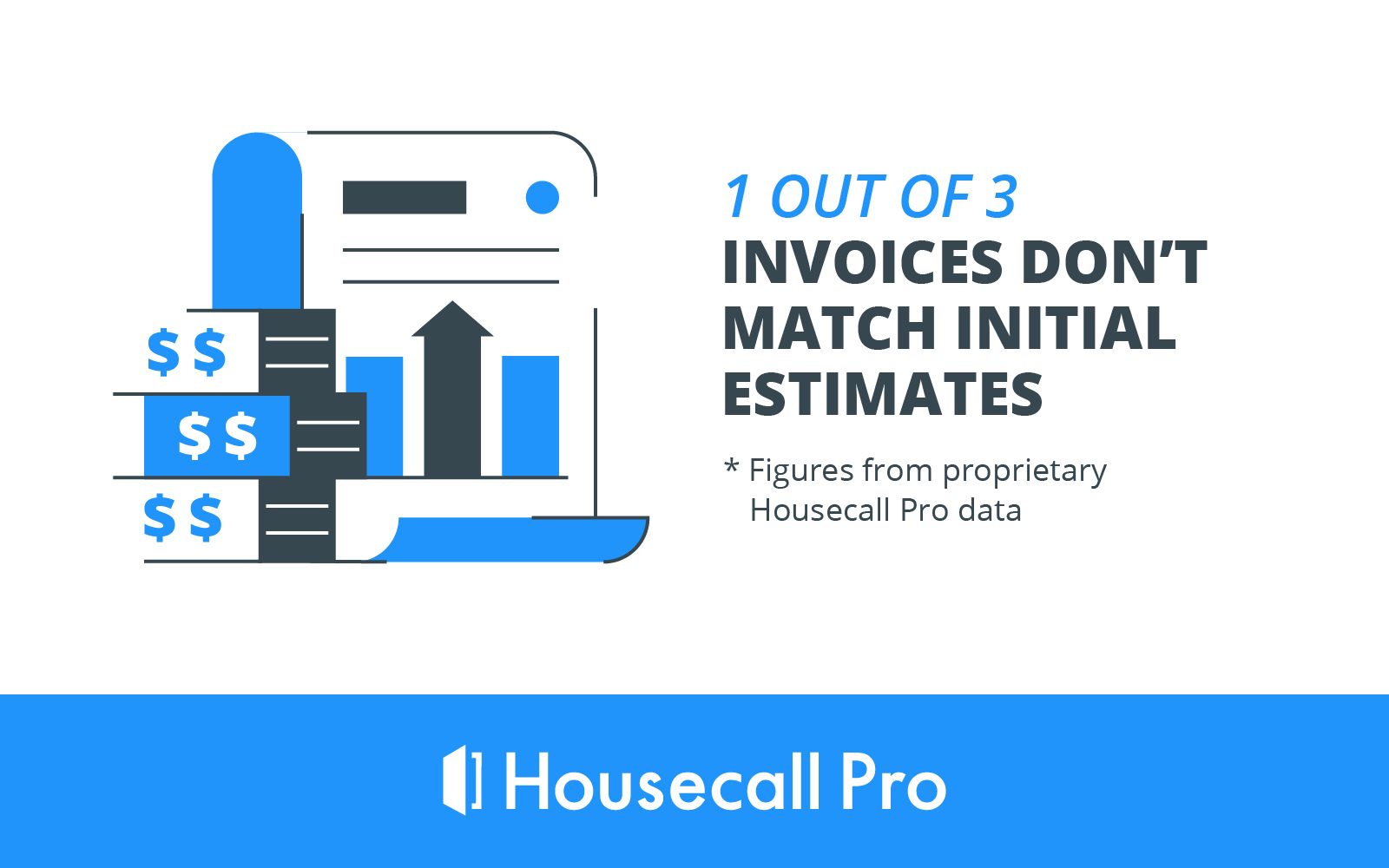 Industries that go over cost the most

Projects go over job cost for a number of reasons. Maybe you started work and ran into some unforeseen challenges with the job or your material costs increased after some pieces were measured and cut incorrectly.

Whatever the reason for going over cost, it often does not sit well with customers, and you can be sure their attention to detail and scrutiny will be heightened and overall satisfaction compromised.

The top 3 industries that go over job cost are: 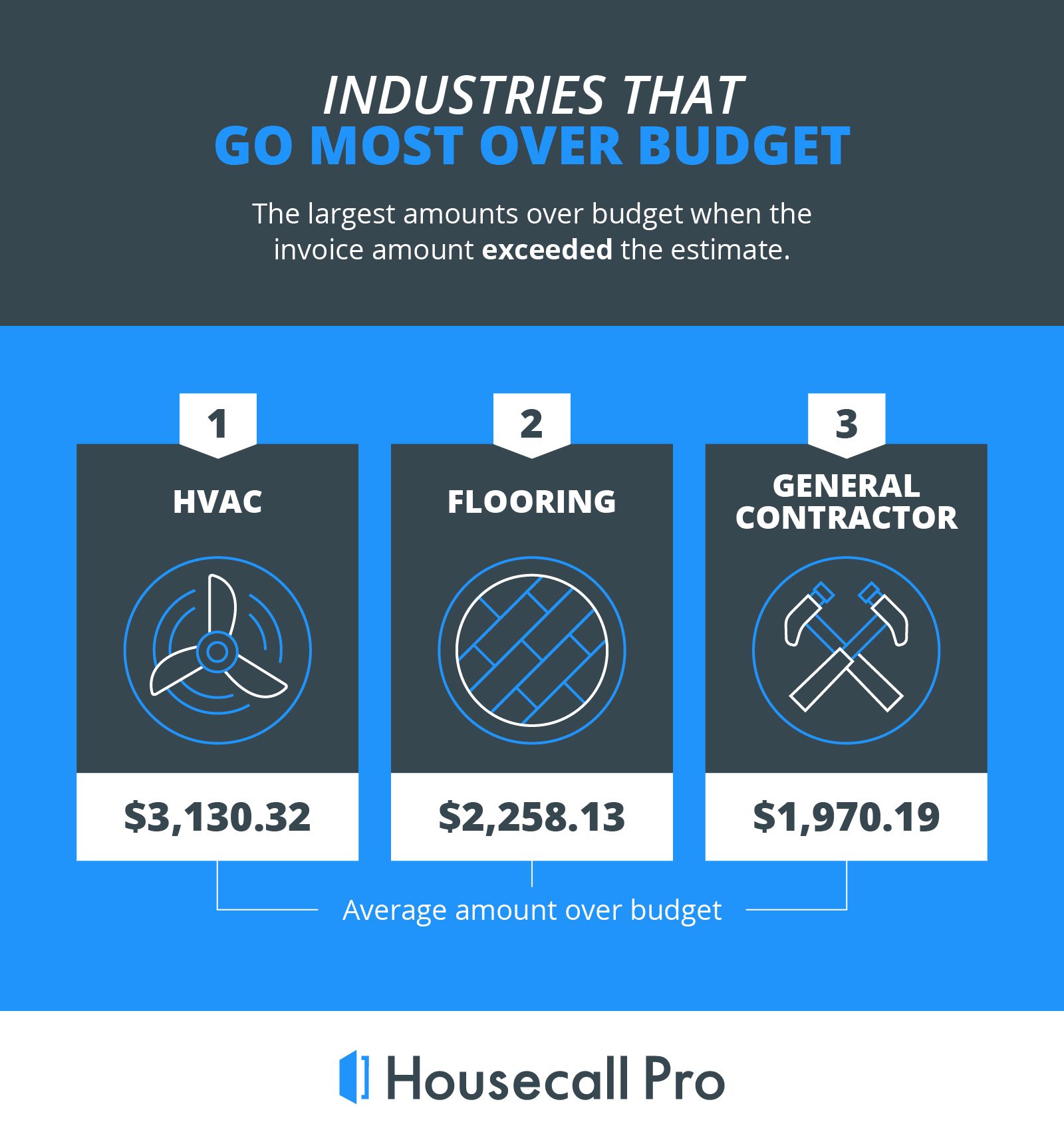 Considering each of these industries is susceptible to a variety of variables and unknowns, it is easy to see how difficult it would be to accurately estimate these projects consistently. What’s interesting about HVAC, however, is that as an industry it is very consistent with staying on estimated job cost. In fact, 69% of all estimates matched the price of the final invoice in our study. Not all industries can boast such precision, however.

The top 3 industries that go over job cost the most often on average are:

Let’s take HVAC contracts as an example. Of the invoices that were more than the estimate, the average amount over job cost was $3,130.32. But there were also projects that came in under job cost, for average savings to the customer of $1,934.99.

We can use this information to infer that

an HVAC project misses its cost it will be for

more than estimated, on average.

Here are the top industries that go over job cost the most financially, and the corresponding normalized amount: 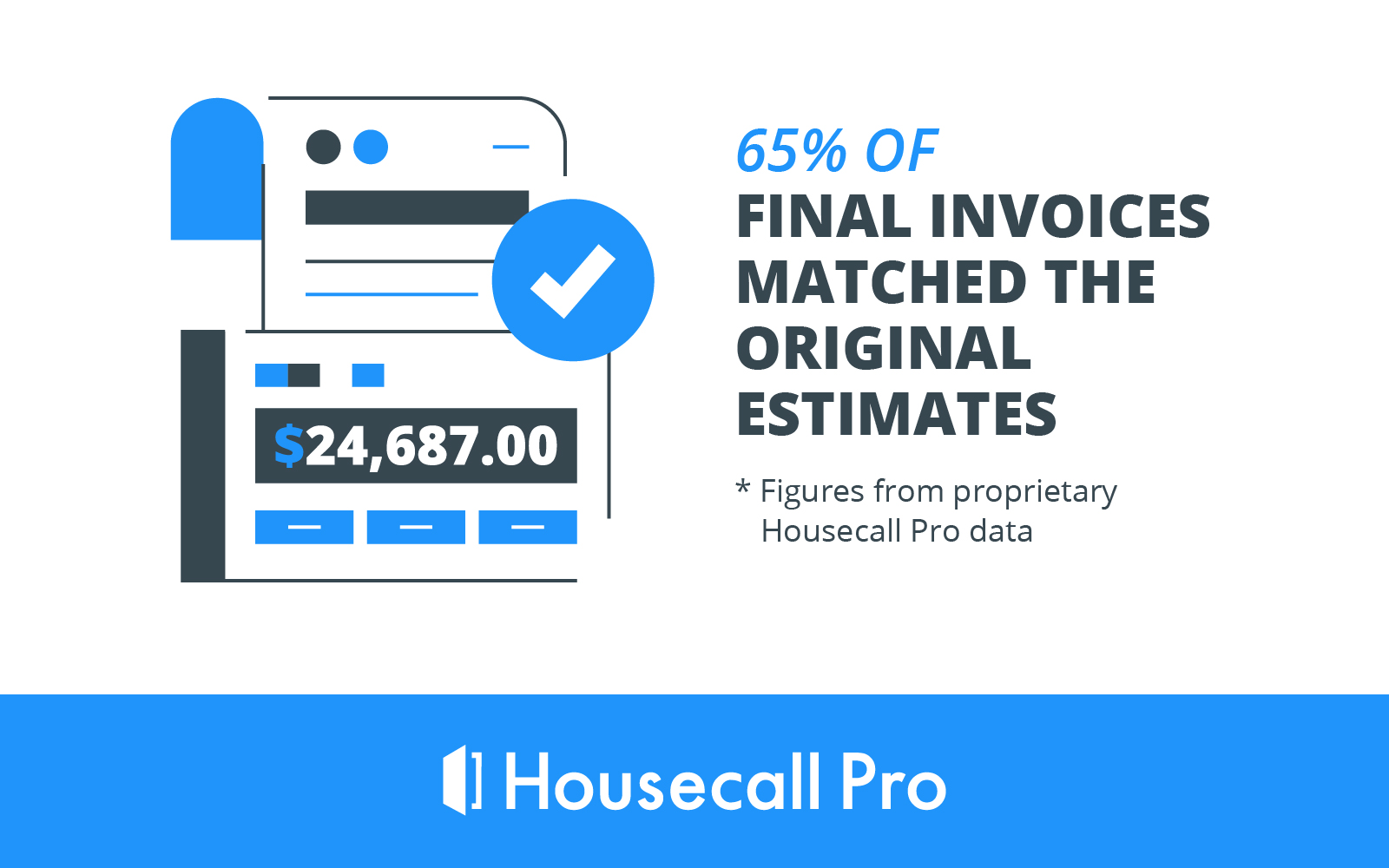 Although some people are wary to trust field service workers, we’ve found that a whopping 65% of all invoices in our study match the original estimate and what’s more, many even come in under the estimated amount.

Perhaps your team was conservative with their estimation to ensure customer satisfaction, or you, for once, encountered no red tape. Whatever causes projects to come in under job cost, this data further validates what we already knew:

they build is overwhelmingly honest, ethical, and reliable.

The top 3 industries that come in under job cost the most on average are:

Industries that come under job cost by the most

Whether the estimate was purposefully given a margin of safety or the project went more smoothly than anticipated. When an invoice comes in below the initial estimate, customers are pleasantly surprised.

When invoices were less than the estimate, these industries came under job cost the most financially:

Industries with the most accurate estimates

Estimating jobs is no easy task. With experience comes the ability to better predict when things might drive costs up. If you work on a masonry team, for example, you’ll quickly learn that job sites with limited truck access will mean carrying tons of materials (literally) and driving up costs.

This is why we applaud the industries with the most accurate estimates. These industries had the highest percentage of original estimates that matched the final invoice amount: 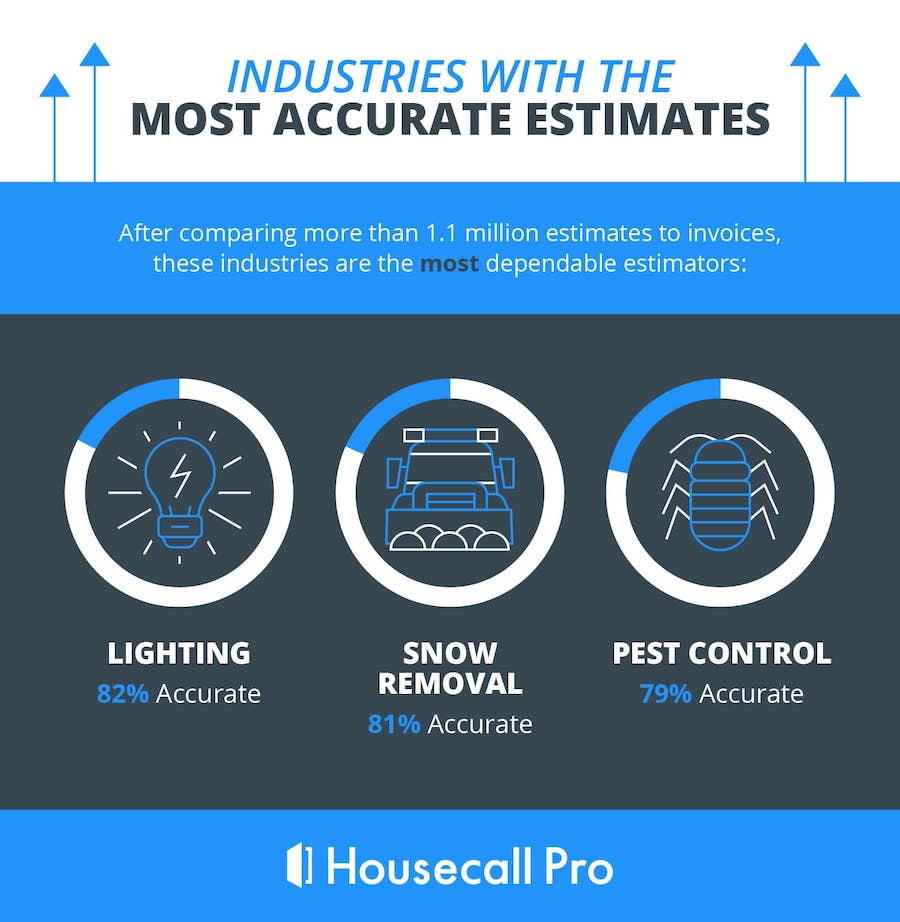 Sometimes in business, you need to absorb some of the extra costs on a project to keep your customers satisfied. This comes with a big and bold asterisk, however, because you must always balance your business’s ability to remain financially profitable.

Some industries don’t have the profit margins to absorb additional costs that weren’t included in the estimate and are forced to invoice the customer for more than initially expected.

Industries with the least accurate estimates

Sometimes our jobs go over job cost, but other times customers see our work and decide they want more of it. Change orders can be a sign of quality work, but they can also be a sign of red tape and additional costs.

In our study, we compare the estimated amount to the final invoice, not accounting for change orders requested from the customer. Of these, here are the industries with the most variation in price between estimate and invoice: 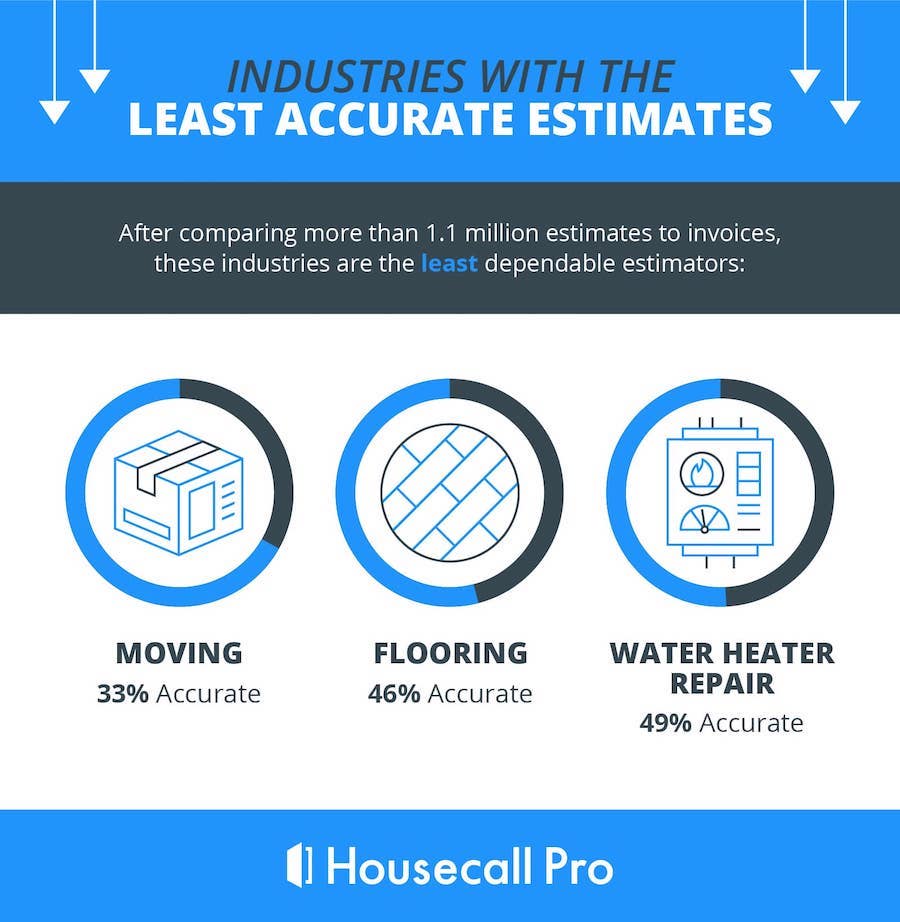 How many estimates convert into jobs?

As we all know, estimates don’t always end in an invoice. But at what point should we question whether we are being too conservative with our estimations, and vice versa.

If you are sending estimates that are too aggressive, you will likely land yourself in a position where you consistently go over job cost, and that will reflect poorly on your reviews. But if your estimates are conservatively high, you may not win the contract against competitors.

Another area that impacts the conversion rate of estimates is the methods of your team when working with the potential client to create an accurate estimate and close the sale. Customers respect clear communication, trust, and most of all, competency.

to clearly communicate time and pricing expectations throughout the entire process.

Is there a standard conversion rate that can be a baseline for us to compare? For this analysis, we looked at a sample of more than 355,000 estimates to find how many converted into jobs.

The overall industry average for estimate conversion is 36%

. This means that 36% of estimates sent actually became paying jobs.

Industries with longer contract duration, such as landscaping and home cleaning, and those with higher average contract value, like heating and air conditioning, have lower average conversion rates, with 29% and 28%, respectively.

The industries with the most conversions from estimation to invoice are:

Here is a more comprehensive list of the top converting industries: 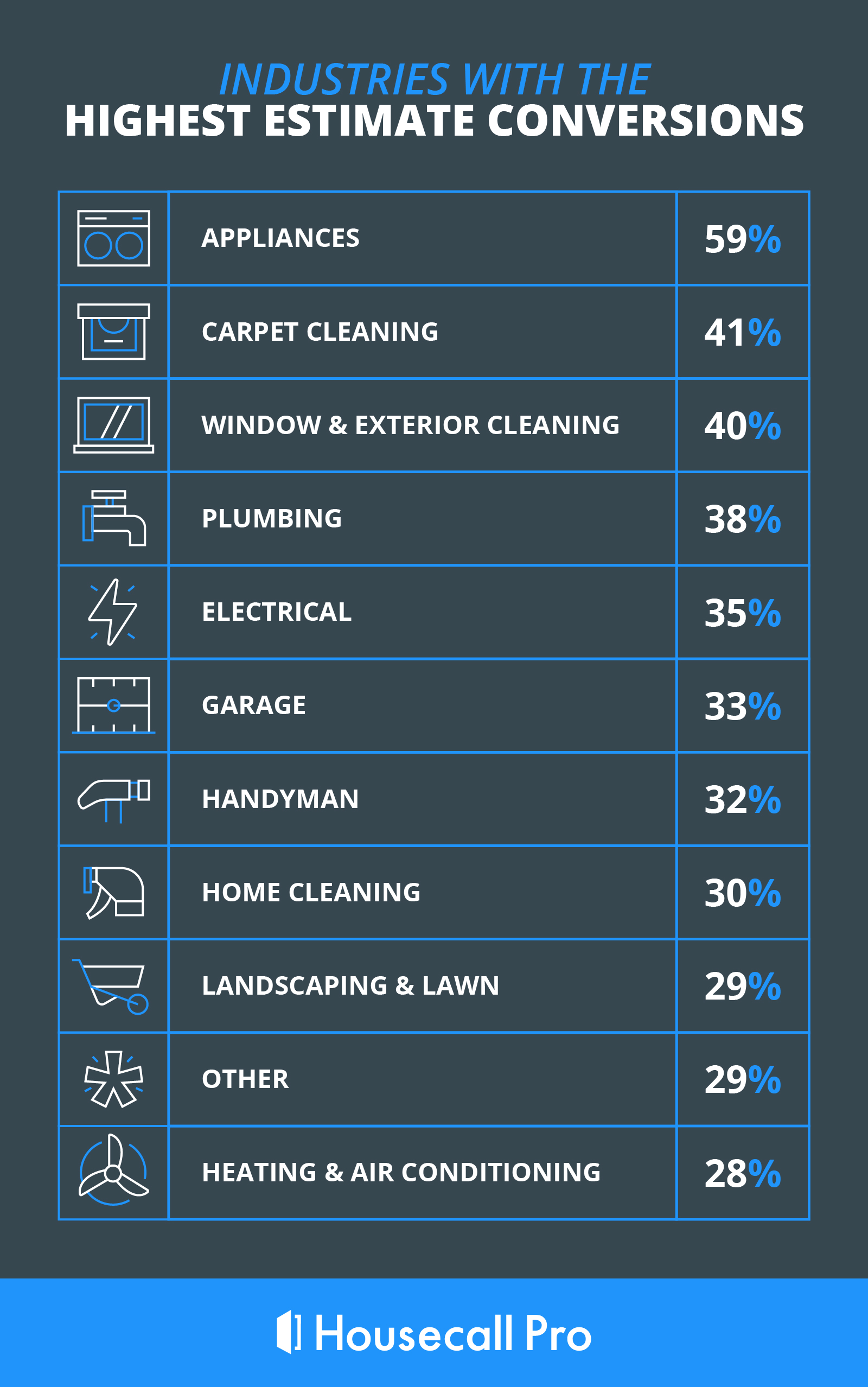 In our study, we looked at a segment of our pros to analyze a statistically significant number of estimate and invoice combinations. In all, we compared 1.1 million to find the amount of variation by industry, the frequency of difference, and more.

Housecall Pro has simplified the process with their easy to use

. You’ll be able to send estimates, have your customers accept online, and boost conversions of your estimates into paying jobs.

Your Business Isn’t Average: A Guide to Knowing Your Numbers and KPIs For the Trades