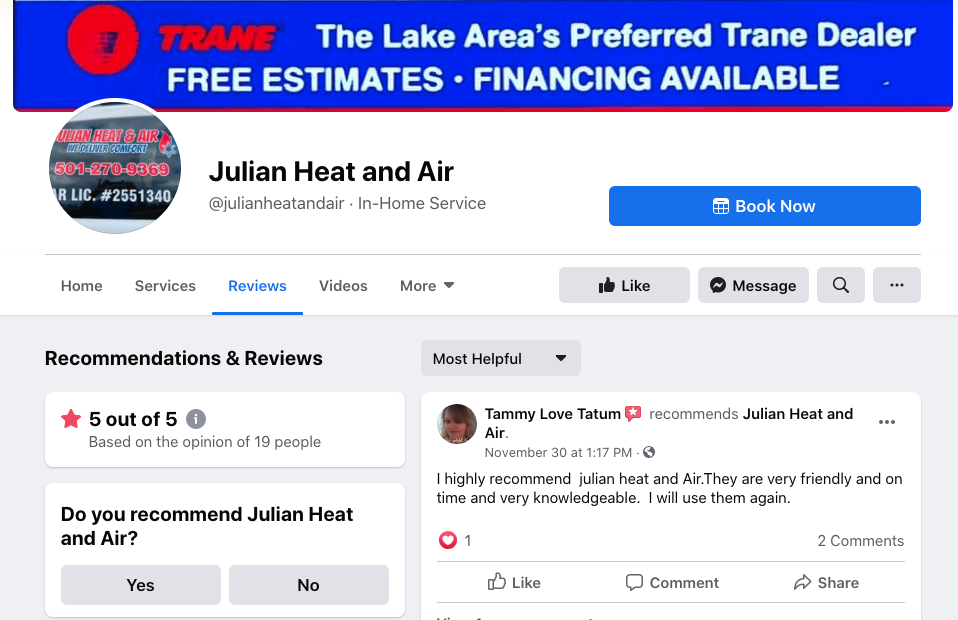 Offering recurring services is a simple way to up your income all year long. We’ve got the tools to help you set up recurring service plans, remind customers they’re due for work, and get paid.

The story behind Julian Heat and Air

“I treat everybody the same, no matter if they’re someone renting a place or the owner of a magnificent home. No matter what we are doing or what budget they’re on. And I really seek that out whenever I am hiring guys,” Jason said.

Pay what you’d want to be paid

In fact, one of his lead technicians is making $6 more an hour working for Jason than he made after 12 years working for another company. “He’s every bit worth it. And he feels it each day,” Jason said.

Consistently show appreciation to your team

But his team is happy to work for him not just because of the pay. Jason consistently shows appreciation for his team, through public posts, tool giveaways, praise on the job, as well as individual coaching and mentorship.

Every Monday, there’s a team meeting at Julian Heat and Air. Jason supplies coffee and sometimes burritos and talks about personal issues and the business. He asks about their families and their pets, and he shares his own personal story with them, as well.

“It’s pretty cool to be that be a leader of a group of people that want to help each other,” Jason said.

Having a hard time finding customers?  Get involved in local Facebook groups

“If it’s cleaning season on heating and air equipment, I love the really dirty, nasty ones, because they have been totally neglected. When I get done, it looks brand new, and I show the people what the other companies are not doing.”

“Facebook has changed everything I’ve done in business. People are more than willing to share their experiences” good or bad. So when I asked others to share what it was like working with me, I’ve had nothing but good feedback,” Jason said.

Give people choices and you’ll earn their trust

Housecall Pro makes this easy with our sales proposal tool that helps the customer visualize their options. Create an estimate in the field within minutes, then turn the estimate into a job with the click of a button.

Another way to earn trust: Educate your customers

“The very first thing I did the day that I went into business for myself was call and set up Housecall Pro. And that was the first thing I did so that I could send “On the way” texts to my customer and let them know I’m going to be there at this time,” Jason explained.

In 2021, Jason’s goal is to open up a second location. We recommend following Julian Heat and Air on Facebook to keep up with their amazing growth.

If you’re a home services business owner who currently hosts a site and has been getting positive review content, this is good news for you.

Even small, local businesses need to have a finger on the pulse of shopping habits so that they can maintain a steady stream of satisfied clients.

We designed a sales funnel strategy specifically for local home service pros. In this guide, we’ll look at the four stages that homeowners go through to become a customer and how to improve them.

When it comes to finding candidates, never underestimate the value of each candidate who applied. Watch this video for free advice on hiring for your business.

When it comes to asking for reviews, timing is extremely important. We’ll help you figure out how to find the right time to contact your customer for a business review.