Plumber Salary in Every State: Updated for 2022 [Infographic]

Plumber Salary in Every State: Updated for 2022 [Infographic]

Find Out the Average Hourly and Top Plumbing Salaries in the U.S.

Whether you’re just getting into the plumbing industry and looking for an entry-level apprenticeship, are a licensed journeyman plumber, or one of the experienced plumbers, knowing the lay of the land can be helpful.

: If you're looking for more information about becoming a plumber, check out this

ultimate guide on getting a plumbing license

How much do plumbers make? In order to give you a sense of the average salary for a plumber in different locations, we scraped data from thousands of plumber job postings on Indeed.com, sorted it, analyzed it, and present it here for you.

We break down the average hourly rate for service plumbers across the country and by state, the average salary range for plumbers, and the number of posted

Hopefully, this gives you a sense of the plumbing industry as it currently stands.

How Much Does a Plumber Make?

The average hourly rate for plumbers

across the entire United States is

But keep in mind that an average is just that--an average. This number includes salaries listed for plumbing positions in the areas with the highest cost of living (like San Francisco or New York) and also low cost of living, like rural towns.

If we zoom in a bit further, the state with the highest average hourly rate is Alaska. Plumbing jobs advertise an hourly rate of $91.30 on average.

On the flip side, the state with the lowest average hourly rate is Arkansas, where listings show an annual salary of $39,600.

When looking at the

as a whole, it can be helpful to see the average hourly amount in each individual state.

Keep in mind that this average includes both the high and low amounts, and is across a variety of positions, from temporary or contract worker all the way up to Master Plumber.

However, knowing the average hourly rate (and combining it with the other data) should give you some context for which states tend to pay the most and which pay the least. 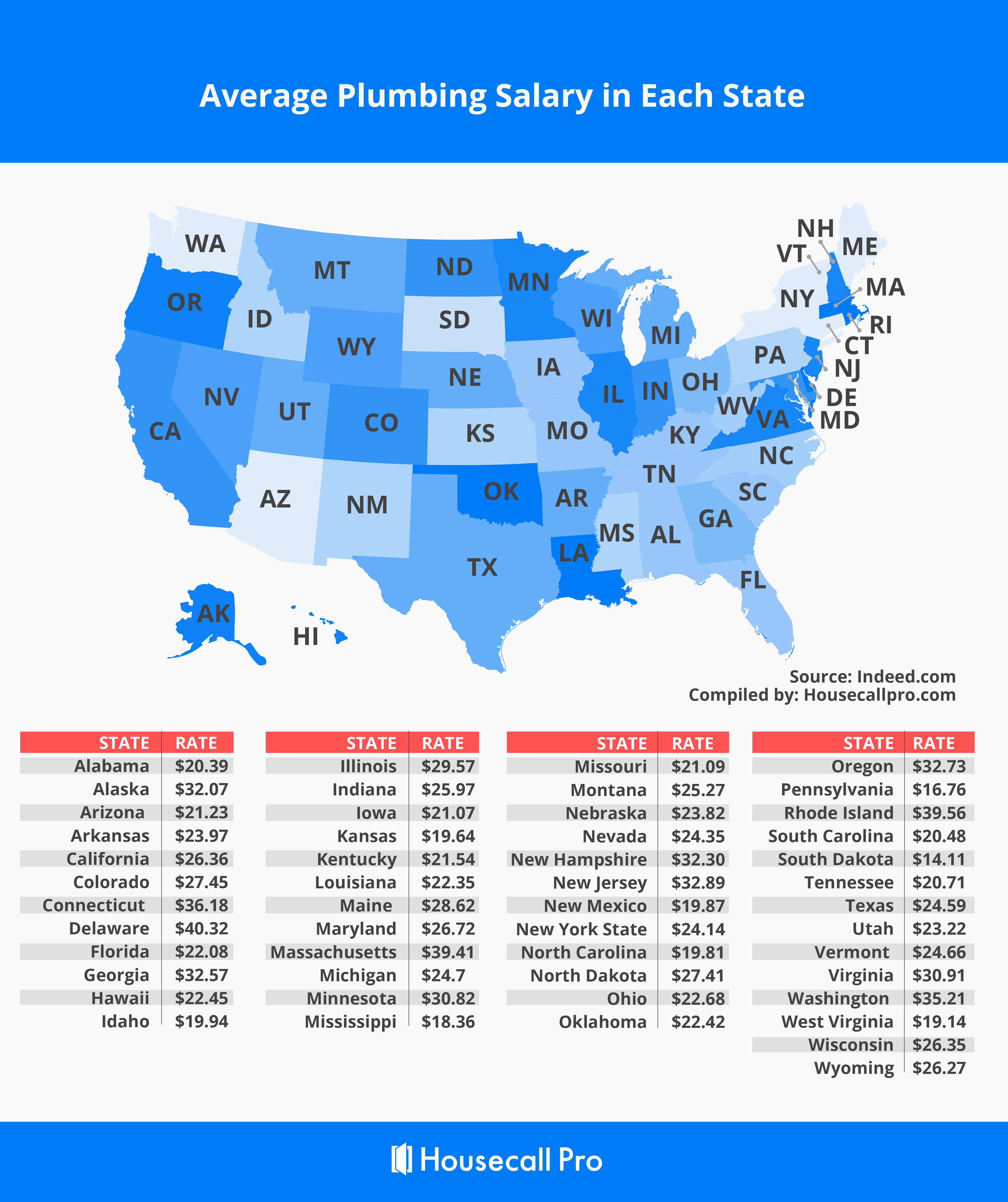 Another way to understand plumbing salaries is to look at the range of pay being offered. Since the average incorporates both the highest and lowest figures, the range gives us some context about how broad the plumber pay scale is from the lowest-paid to the highest-paid plumbing positions.

Across the entire United States, the average salary range for plumbing positions runs from

Note that, again, this range includes a variety of positions. Pay scale for a plumber is not only based on location, but certifications and years of experience. The highest rate could represent a Master Plumber, while a licensed journeyman is the median, and an apprentice would receive half of that rate, representing the lower end of the scale. In collecting this data, we didn’t exclude any listings based on the job title listed, so it includes all types of roles.

Looking beyond the national average, we can get a sense for what plumbers are earning in each state by looking at the range of salaries shown on a state-by-state basis.

This analysis gives us a high and low benchmark for what plumbers might expect to earn in their role, based on their location.

Numerous states have an average lowest hourly wage of $7.25/hour (the minimum wage base salary). Hawaii has the highest average hourly wage at $81.85/hour.

Here’s a breakdown of the salary ranges in each state found in our analysis. 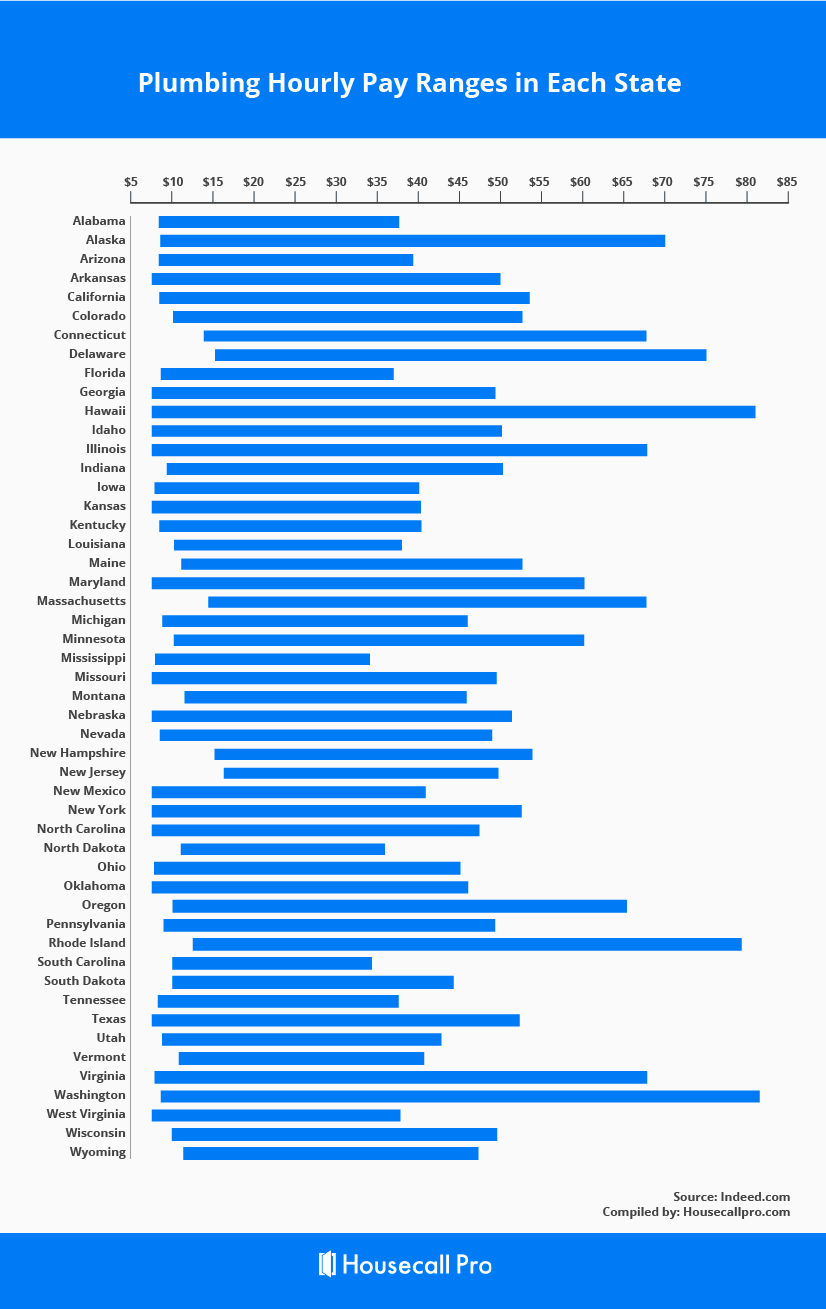 Only looking at hourly rates can make it difficult to get a sense of what an annual salary might look like. It can be helpful to calculate what an hourly rate translates into over the course of an entire year.

From looking at Indeed’s data, we found that they segmented job listings into salary buckets. The highest bucket was for listings that advertised an annual salary of more than $55,000 per year. We dug into this data next.

of posted jobs within each state that average a salary of more than $55,000/year. We also list the

of all the jobs listed in each state that have a salary greater than $55,000/year.

California has the highest

Rhode Island has the highest 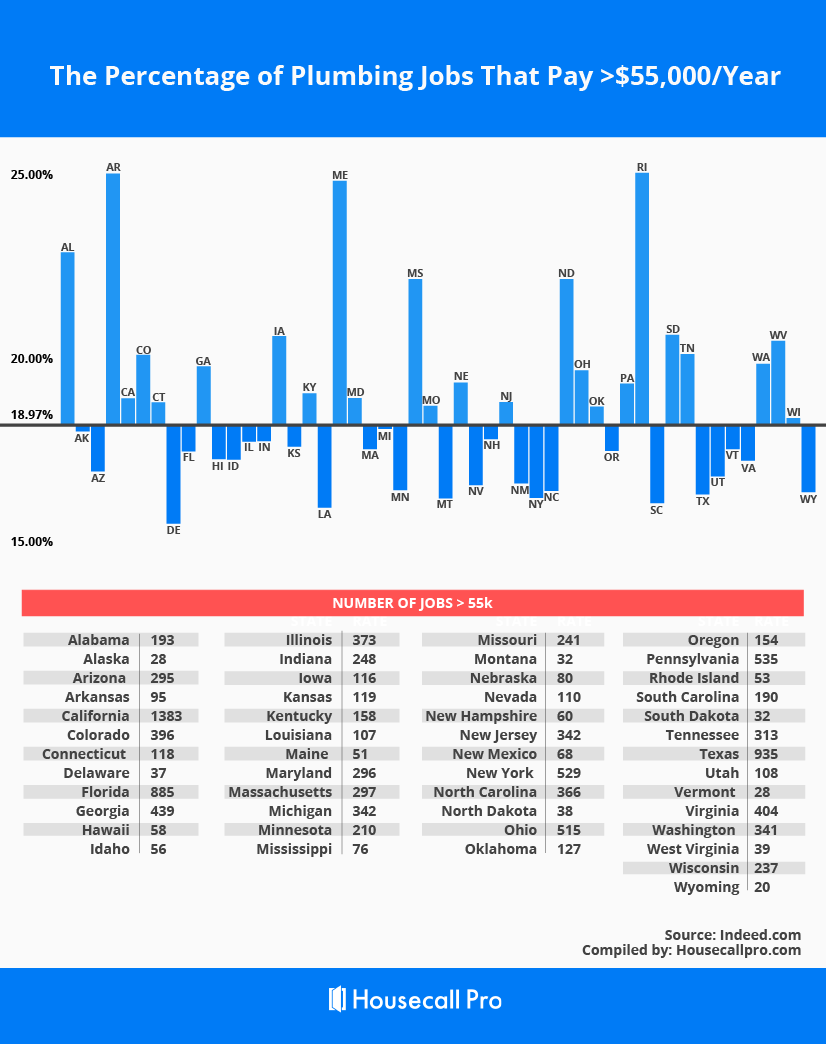 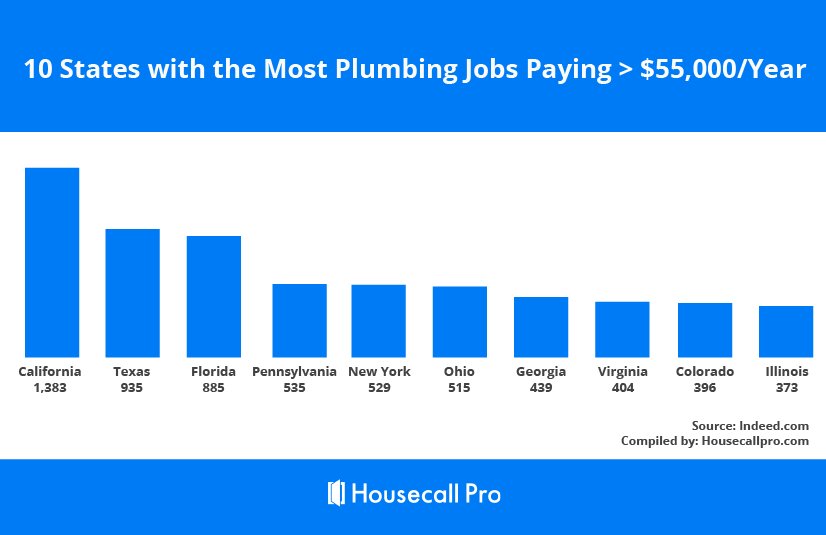 Cities With the Highest Plumbing Salaries in Each State

To add another layer to this analysis, there is generally a large range of pays within each state. Roles in big cities tend to offer higher salaries than those in smaller towns and rural communities.

This means that, as a plumber, you may not want to just compare your salary to the country as a whole or even your entire state. Instead, you can look at salaries offered in cities.

In addition to determining the states that pay the highest average amount, we also evaluated which cities within each state pay the most. In other words, if you are a plumber working in that city, you’re probably making more than most other plumbers in your state.

There was insufficient data from Alaska and Vermont for us to determine which city had the highest average hourly rate.

While this data primarily represents

throughout the United States, it does reveal a significant amount of useful information such as segmenting out those who already know how to use

With the average salary being approximately $50,000/year (and many jobs available above that amount), it demonstrates that plumbing is indeed a well-paying profession. Clearly, the plumbing industry is robust, and now is as good a time as any to start a plumbing career or a plumbing business.

Additionally, this data can be useful when it comes to setting competitive salaries, evaluating your personal part-time or full-time job salary, and determining what sorts of pay increase you might be able to expect in the future.

Top Plumbing Specialties to Look Out for in 2022

How to Make a Million Dollars as a Plumber