How to Market An Electrician Service Business By Buying People Coffee (Interview with Mike Parks, Owner of Electric Medic)

How to Market An Electrician Service Business By Buying People Coffee (Interview with Mike Parks, Owner of Electric Medic)

For the past two months, Mike Parks has been buying folks coffee.

The strategy is working. He’s already seen over 1300% return on investment and, as far as Mike is concerned, an even greater return in brand recognition.

Are you an electrician looking for more leads? In this post, we’ll tell you how Mike came up with the idea and the specifics he uses to ensure its success.

Success doesn’t happen with one job. Communicating with your past customers should be your #1 marketing priority. Housecall Pro automates email & direct mail marketing and helps drive repeat business. 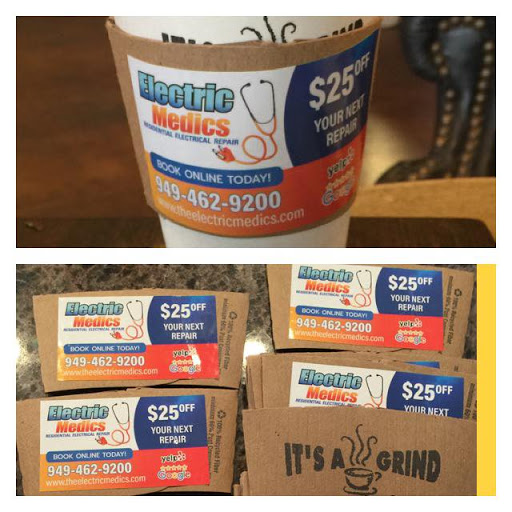 Mike is always trying to think of new ways to reach his target demographic. The thing is, Mike

his demographic: a homeowner over the age of 35 in Orange County. And every day he goes to the same local coffee shop near his house.

One day, he looked around the busy space and noticed all of the cups on the tables, each in a coffee sleeve with the coffee shop’s logo on it. Mike thought to himself, “Why can’t that be a usable space for advertising?”

Mike and his technicians have stickers with the company contact info that they place inside the electrical panel after a job. Mike put one of those stickers on his coffee sleeve.

Mike and the owner of an <a target="_blank" rel="nofollow" href="http://itsagrind.com">It’s A Grind Coffee House</a> sat down and planned out a strategy that would work best for both businesses. Here’s what they came up with:

Once a month, Mike pre-buys $150 worth of coffees. For as long as his budget lasts, anytime anyone orders a regular coffee of any size (as opposed to an espresso-based drink), the barista rings it up and tells the customer that their coffee is on Electric Medics today. The barista will point to Mike who will be sitting in the coffeeshop. Their coffee will come with a sleeve branded with Electric Medic’s sticker.

1. Be There to Talk to People

For Mike, being there to talk to customers is the key to this strategy’s success.

He could pre-pay for the drinks and call it a day: leaving the barista hand out coffee sleeves with his company information. But the real marketing that happens isn’t done through the coffee sleeves, it’s the personal interactions.

“People for the most part want to say thank you and that they appreciate the coffee,” Mike explained. And when they do come up to thank him, they tend to ask questions about the kinds of services Electric Medics covers.

“They want a comfort level and that interaction is very important in my opinion,” Mike said.

Mike believes this tactic works much better than the scenario we’re more familiar with: when a solicitor asks people for their time or their personal information in exchange for a gift card, etc.

People get the free coffee either way, and it’s up to them if they want to follow up with him.

“I didn’t solicit them; I didn’t approach them. It was very hands off in a way that I could have an interaction by doing something nice.”

A nice personal touch: he gives people a business card with his cell phone number.

From there, when people text him about a job, he’s able to personally respond back then refer them to his company’s

to set up an appointment.

2. Make It Easy on the Business Owner

Mike could’ve made it more complicated, like paying for every fifth coffee or whenever his coffee sleeve with a sticker came up in the stack.

“Let’s just keep this simple because I wanted to make it very easy on the owner of the establishment and his staff.”

Mike happened to know the coffee shop owner, but he doesn’t believe you need to have a relationship before approaching them about collaborating. Their business gets something out of it, as well.

“He's helping another small business owner, which is great, and he wins because these customers came in and got a free cup of coffee unexpectedly,” Mike said.

3. Mix Up the Day and Time To Hit Different People

Mike might run this giveaway on a weekday or a weekend, in the morning or the afternoon. Like Mike, many customers have a regular day and/or time that they frequent the coffeeshop. By selecting different days and times, he’s able to raise awareness to more people.

This same approach can be used in online marketing, as well. For instance, you can select a <a target="_blank" rel="nofollow" href="https://www.facebook.com/business/help/1381935425400769">Facebook</a> or<a target="_blank" rel="nofollow" href="https://support.google.com/google-ads/answer/2404244?co=ADWORDS.IsAWNCustomer%3Dfalse&hl=en">Adwords Ad</a> to run at different times and on different days.

4. Start Hyperlocal and Work Your Way Out

In both his community-based and online marketing efforts, Mike starts with a small area and works his way outward.

For instance, Mike uses Adwords and puts his marketing budget into one city at a time within Orange County. “Right now my strategy is to treat it like carpet bombing a city, and then once I own that city and I move on to the next one.”

The same goes for his coffee project. He started with the coffee shop closest to his house, but plans to expand to other cafes in the area.

By frequenting the same coffeeshop, regulars there know him. There’s one group of women in particular that tend to meet up at It’s a Grind at the same time as Mike. Because they know him, Mike is able to get their advice and learn more about his target customer.  “You can actually get your fingers on the pulse of what the customer for your area is looking for,” Mike explained.

Occasionally Mike will buy the group danishes and ask them questions. For instance, they’ve told him what they expect to pay for certain services which has given him a better idea of how he’s pricing compared to the competition.

5. Focus on the Brand-Building, Not the Immediate Return

So far, Mike has spent approximately $300 on coffee and $15 on stickers. The investment has led to at least $4500 of sales. These are sales from folks who specifically called and scheduled business with him and mentioned he bought their coffee.

But, for Mike, the bigger payoff is in brand recognition which lasts much longer than an immediate housecall.

that needs to be happening.”

Success doesn’t happen with one job. Communicating with your past customers should be your #1 marketing priority. Housecall Pro automates email & direct mail marketing and helps drive repeat business.

By offering folks a personal memory with his company, he also makes the less personal advertising (AdWords,

, etc) and organic search more effective. Wherever someone comes across the name Electric Medics, they won’t just see yet another electric company, they’ll remember the guy that bought them coffee.

How To Start an Electrical Business