The United States of Trades: Demand for Home Services Across the Country

Whether you’re looking for a job, trying to determine if you should start a business, or simply trying to get a feel for the competitive landscape, knowing which jobs are in demand can be incredibly useful information.

But how can you possibly know which jobs are in demand in which states? How, for example, can you know where the demand for HVAC jobs is the highest?

That’s where we come in.

We pulled data from millions of Google searches as well as thousands of jobs posted on Indeed.com to determine which states have the highest demand for trades--looking at both consumer demand (as measured by search volume)

hiring demand for each profession within each state.

The result, we are calling

The United States of Trades

For each trade, we analyzed both the relative search popularity of topics related to that search and the relative demand for jobs within that industry to calculate an overall demand score.

More on the full methodology of our study at the bottom of this post, but for now, let’s dig into the data!

HVAC Demand is Highest in Kentucky, Virginia, and Tennessee 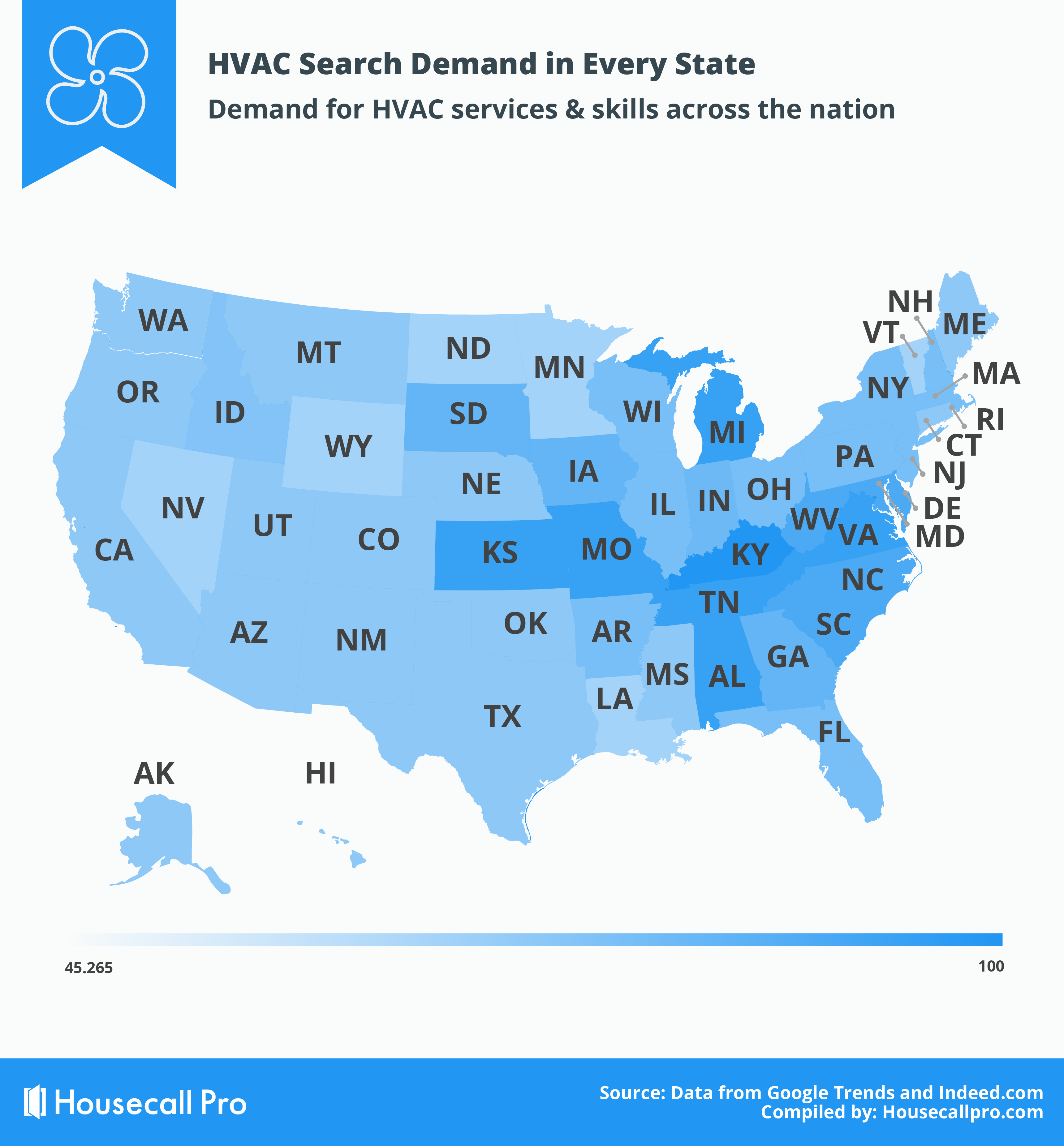 In our first trade analysis, we looked at the demand for HVAC services and labor.

. (The findings comprised search data from an entire year of 2019.) 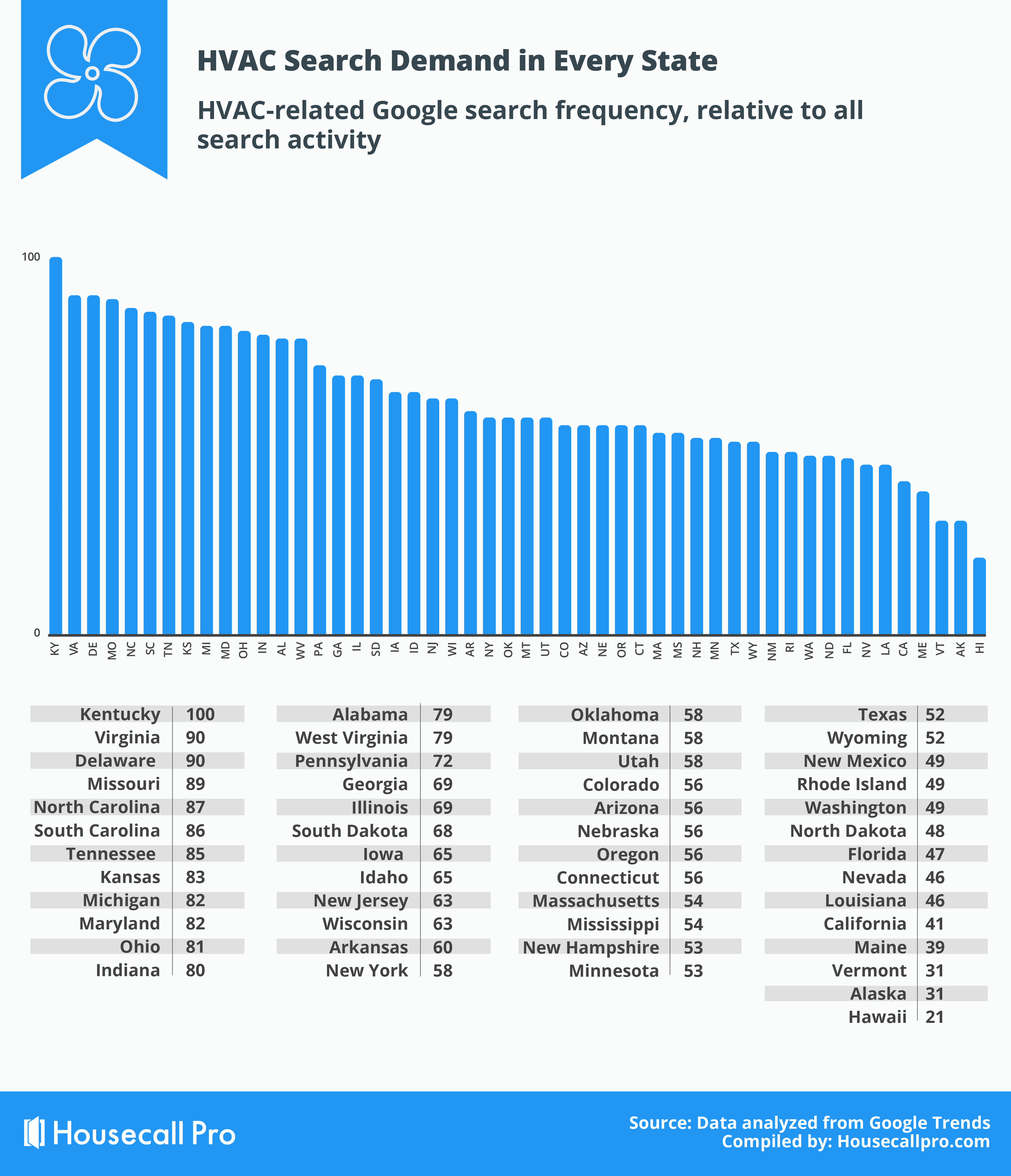 First, the state with the highest relative search volume (representing consumer demand for service) is Kentucky.

This means that out of all the states, Kentucky has the highest percentage of searches related to HVAC issues. This suggests that, in Kentucky, a higher percentage of people are dealing with HVAC related issues and need help resolving them. 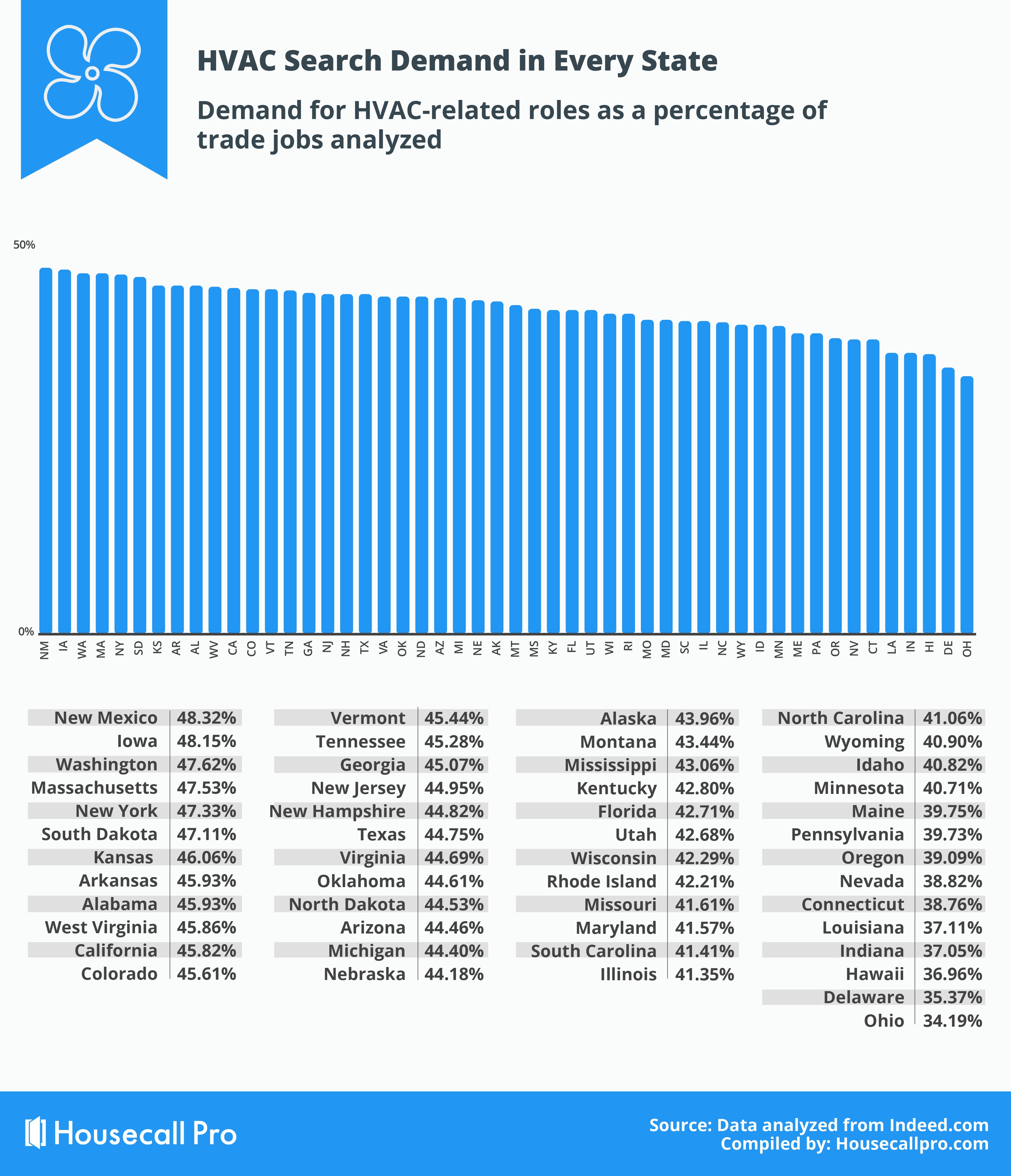 The state with the highest

of HVAC jobs posted (relative to other trade jobs analyzed for electrical, pest control, and plumbing) is New Mexico at 48.3%.

This means that out of all the trade jobs from these 4 professions posted on Indeed in the state of New Mexico, 48.3% of those jobs are HVAC related.

Iowa, Washington, Massachusetts, New York, and South Dakota all follow New Mexico in terms of the percentage of jobs posted.

The state with the highest final score is Kentucky.

Virginia, Tennessee, Kansas, and Missouri make up the remainder of the top five final scores.

, Kentucky appears to the best place to do so, although demand for labor is also high, meaning there may be more competition for skilled HVAC techs.

The data also suggest that you may be able to charge more for your services in Kentucky since the overall demand is higher. 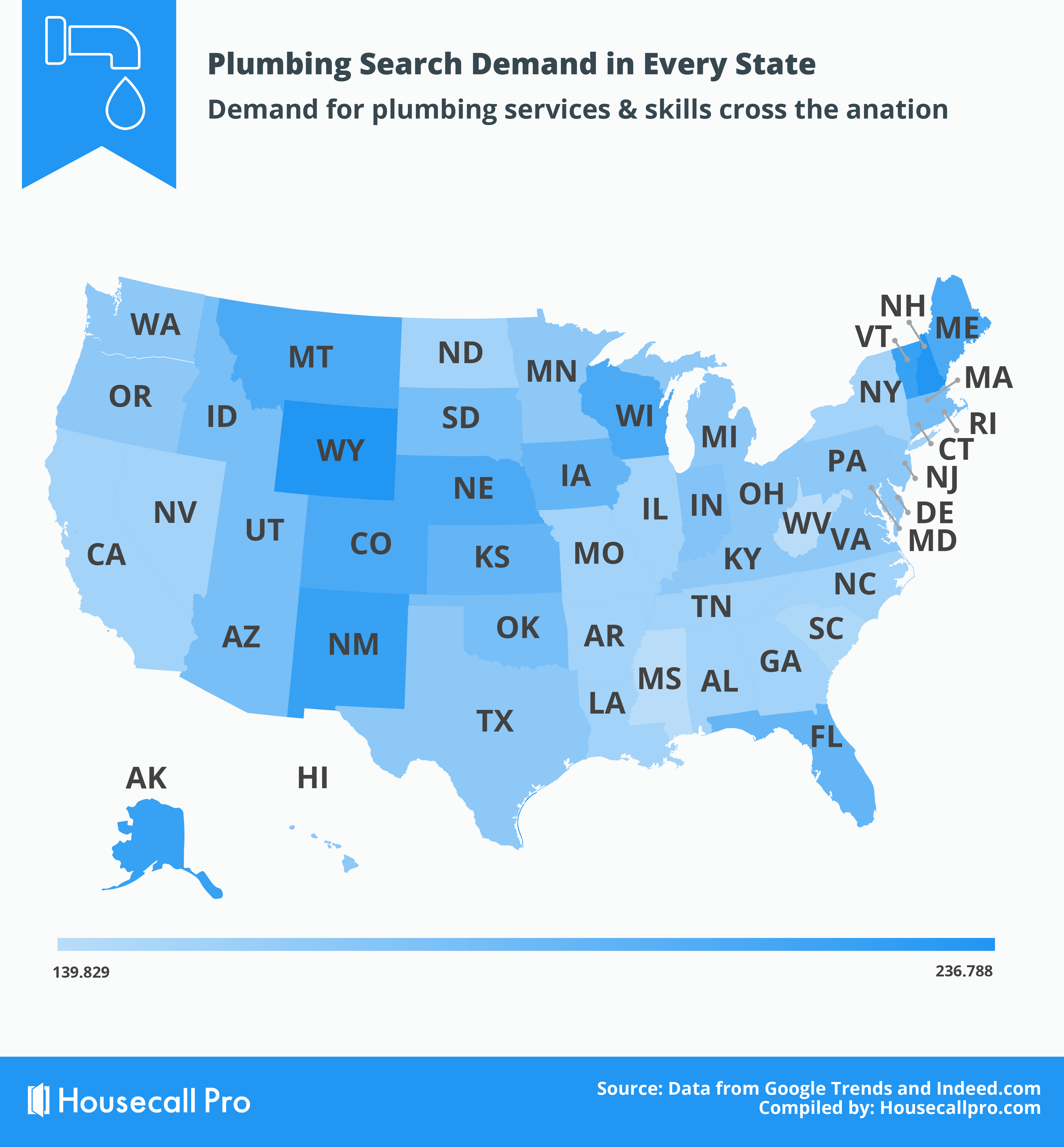 Next up, we analyzed plumbing data using the same methodology. 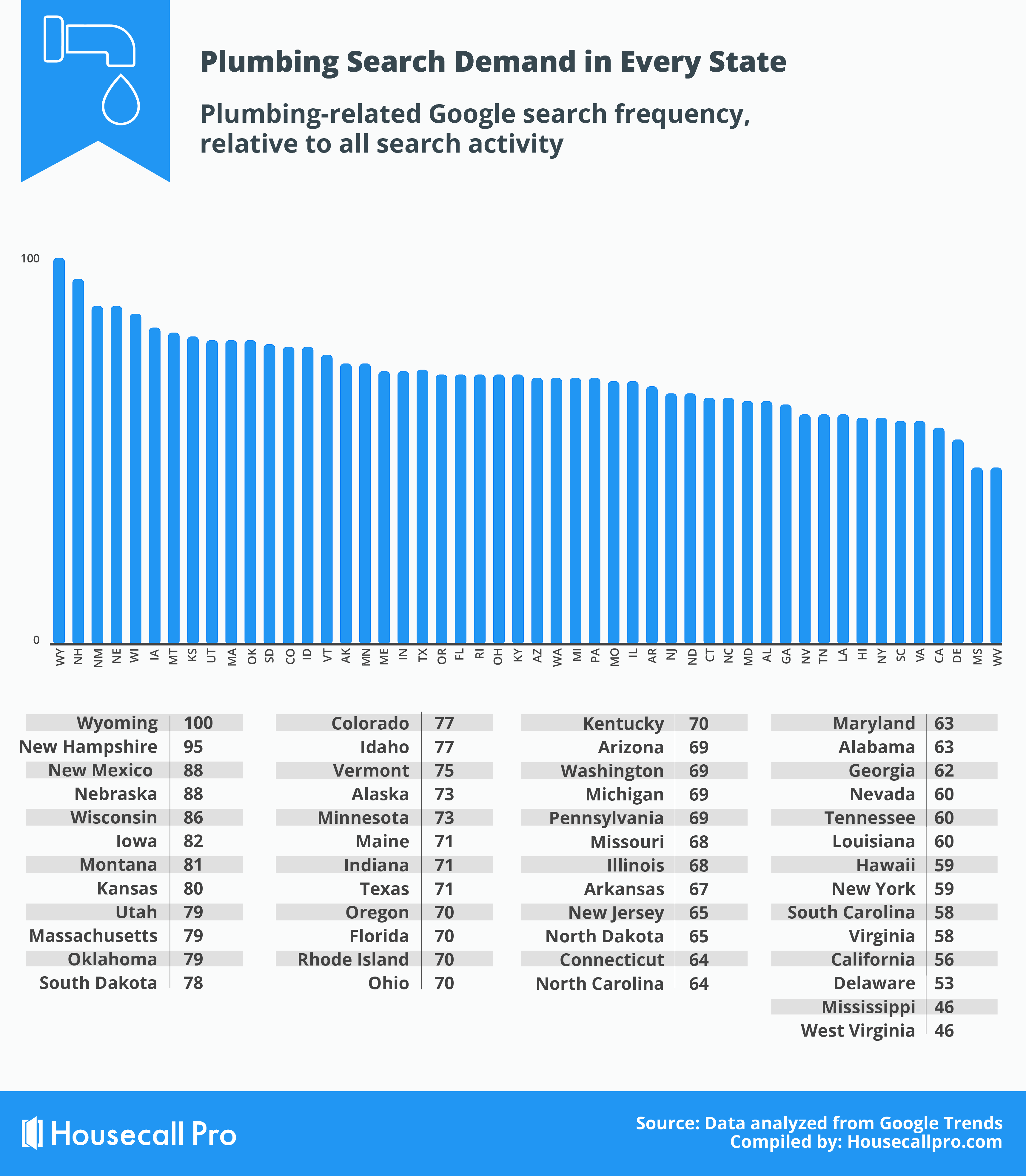 The state with the highest relative search volume is Wyoming.

Out of all the states, Wyoming had the highest percentage of searches related to plumbing (“plumber near me”, etc.). New Hampshire, New Mexico, Nebraska, and Wisconsin follow Wyoming in terms of relative search density. This suggests that, for whatever reason, a higher percentage of the Wyoming population are having plumbing problems in Wyoming than in any other state--and they’re turning to Google for answers (or a plumber!)

It’s critical to remember that these numbers are relative to the overall search volume within that state. In other words, Wyoming doesn’t necessarily have the most overall plumbing problems. Rather, the search data suggest that searches related to plumbing are most disproportionately represented in Wyoming residents’ search activity when compared to the search data from other states. 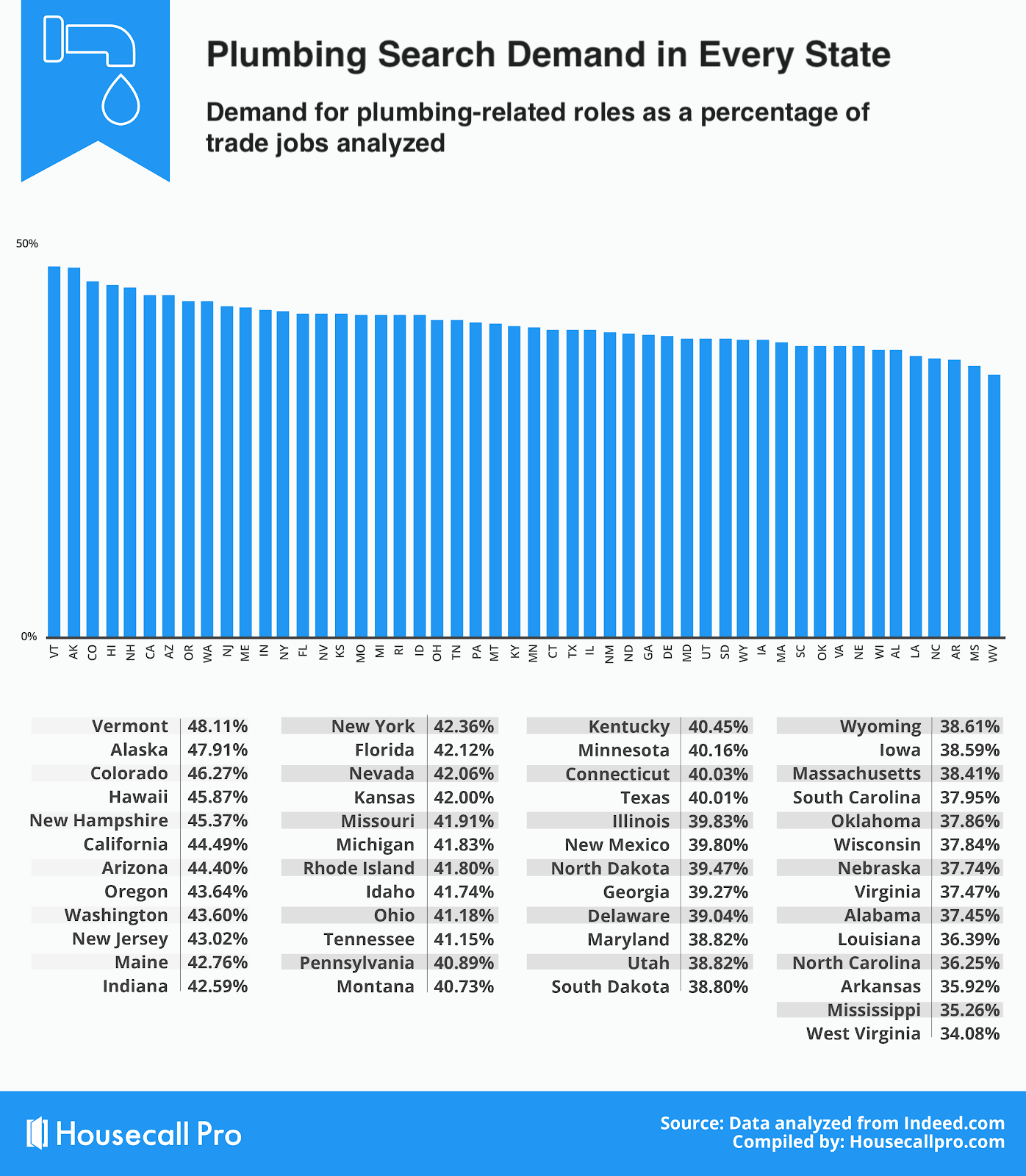 The state with the highest percentage of trade jobs that are plumbing related is Vermont, at 48.11%.

Alaska, Colorado, Hawaii, and New Hampshire round out the top five here.

Clearly, the demand for plumbers is relatively high in Vermont, indicating that it may be an ideal place to look for a plumbing job, but perhaps difficult to find talent if you’re on the hiring end of the equation.

The state with the highest combined demand score is New Hampshire.

Again, this has implications, whether you’re trying to find a job or

. Based on the data, New Hampshire has the highest overall demand for plumbing services. While this certainly may allow you to charge a premium for your services, it may also attract more competition and lead to a challenging hiring environment.

Electricians Are in Shocking Demand in Wyoming, Maine, and Iowa 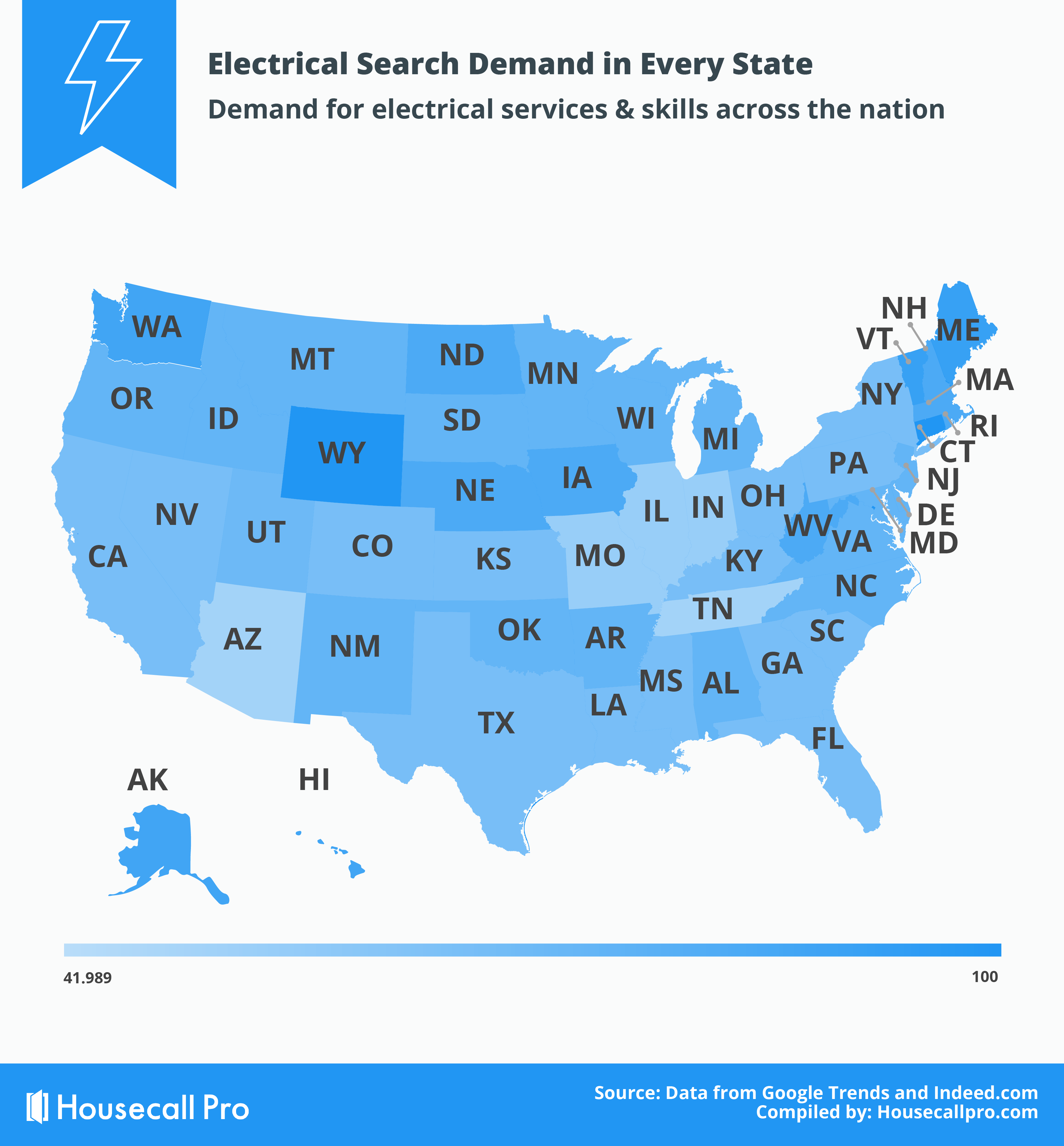 Looking at data on demand for electricians, we found that Wyoming again topped the ranking--alongside some other leaders.

Just as with plumbing, Wyoming is the state with the highest percentage of electrical-related searches. 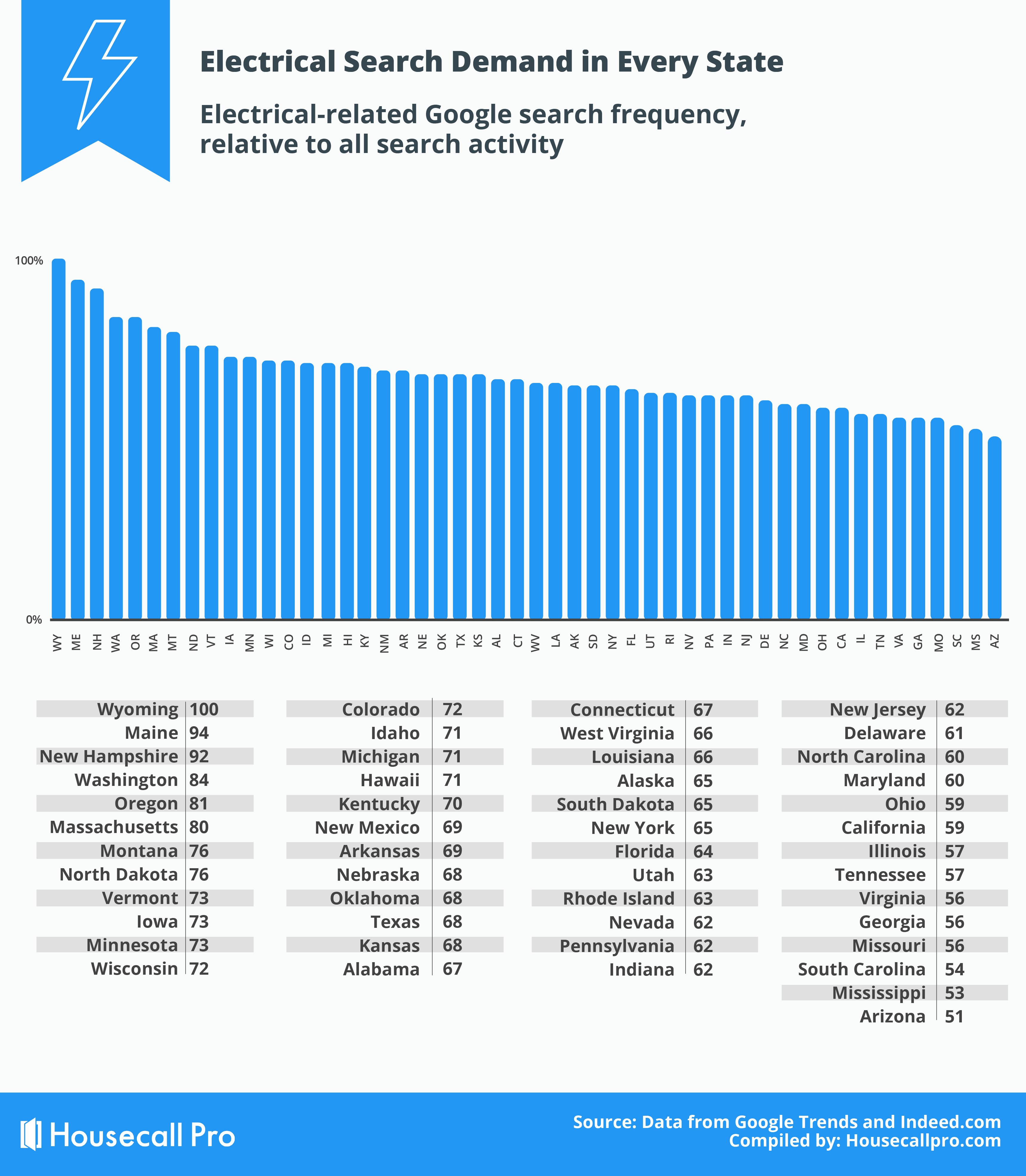 Maine, New Hampshire, Washington, and Oregon round out the top five. Again, this indicates that the population of Wyoming may be having more electrical issues (relatively speaking) than other states. A higher percentage of the population is searching for electrical solutions in Wyoming than in any other states. 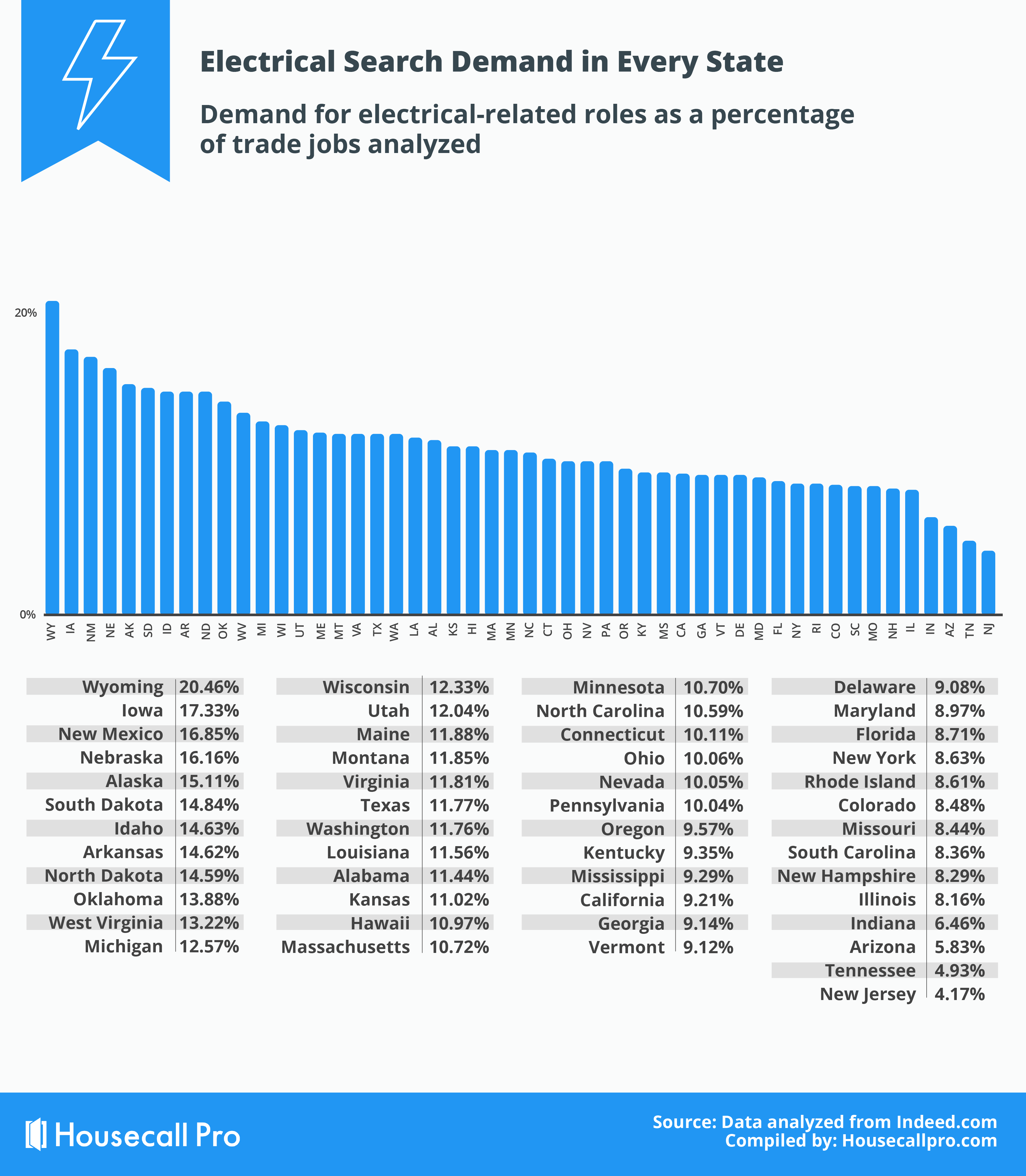 Wyoming is also the state with the highest relative percentage of electrician jobs posted--by a wide margin--with 20.46% of jobs in these 4 trades being electrical-related.

Finally, Wyoming is the state with the highest total demand score for electricians.

Keep in mind that the data is relative and adjusted for differences in population. So, again, while Wyoming has one of the smallest total populations in the United States, that shouldn’t be the determining factor in the overall demand calculated in our study.

That being said, while the relative

of search volume and posted jobs may be high compared to other states, the

numbers are probably smaller compared to other states.

Nevertheless, we can still conclude that the electrical industry seems robust in Wyoming. Clearly, people are having electrical problems, as the search data reveals. Clearly, there is a need for qualified electricians, as the percentage of jobs and final score shows. If you’re looking for a

job as an electrician

, there might be high demand for your skills in Wyoming. And, despite the relatively low population, it seems there could be a need for new electrical companies to spring up. Anyone up for moving to Laramie?

Pest Control is Popping in Alabama, Utah, Florida, and Tennessee 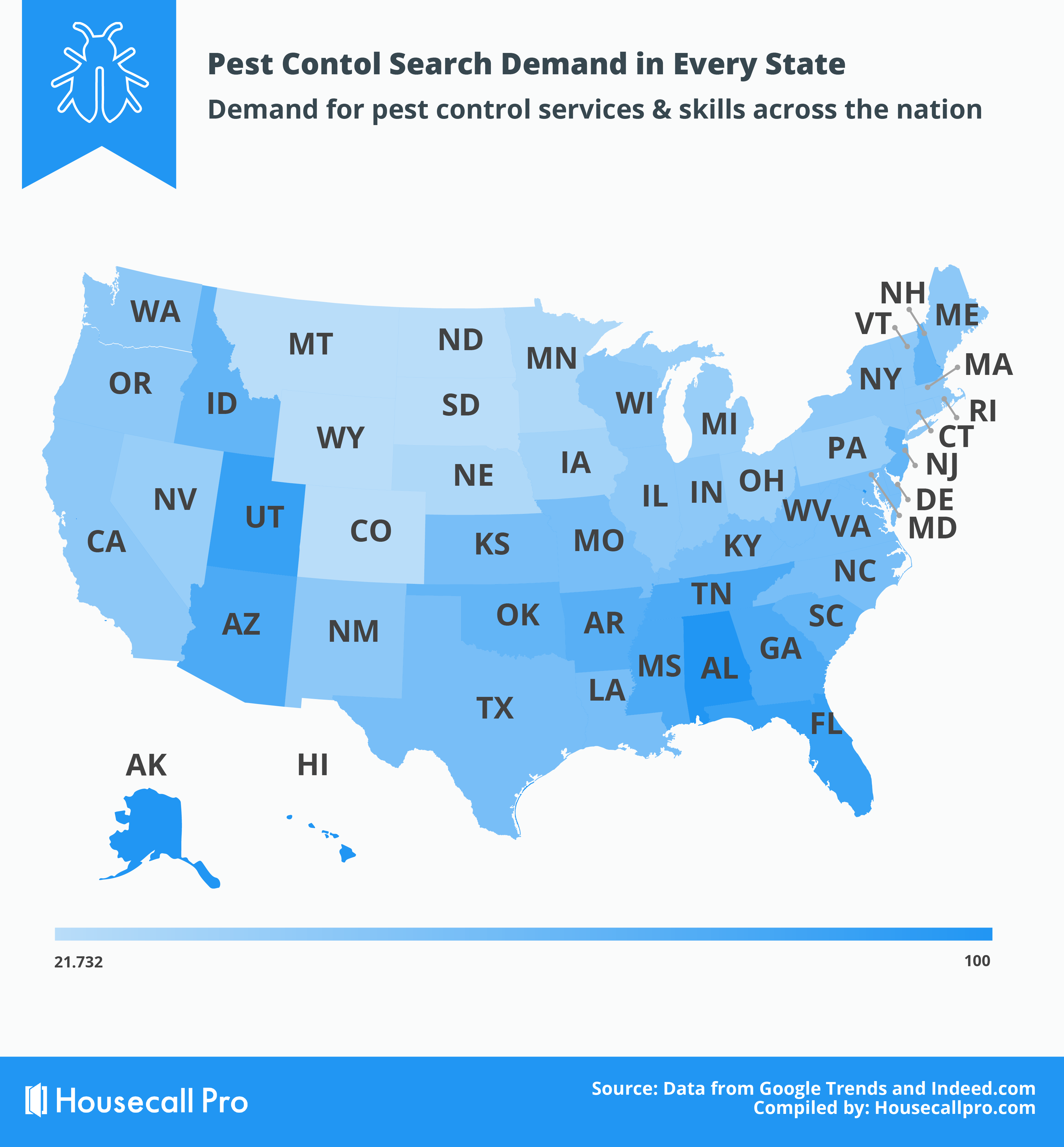 In our final analysis, we looked at the demand for pest control companies. Again, using our combination of consumer demand and hiring demand, we determined that southern states--along with Utah--seem to have the greatest need for services like exterminators. 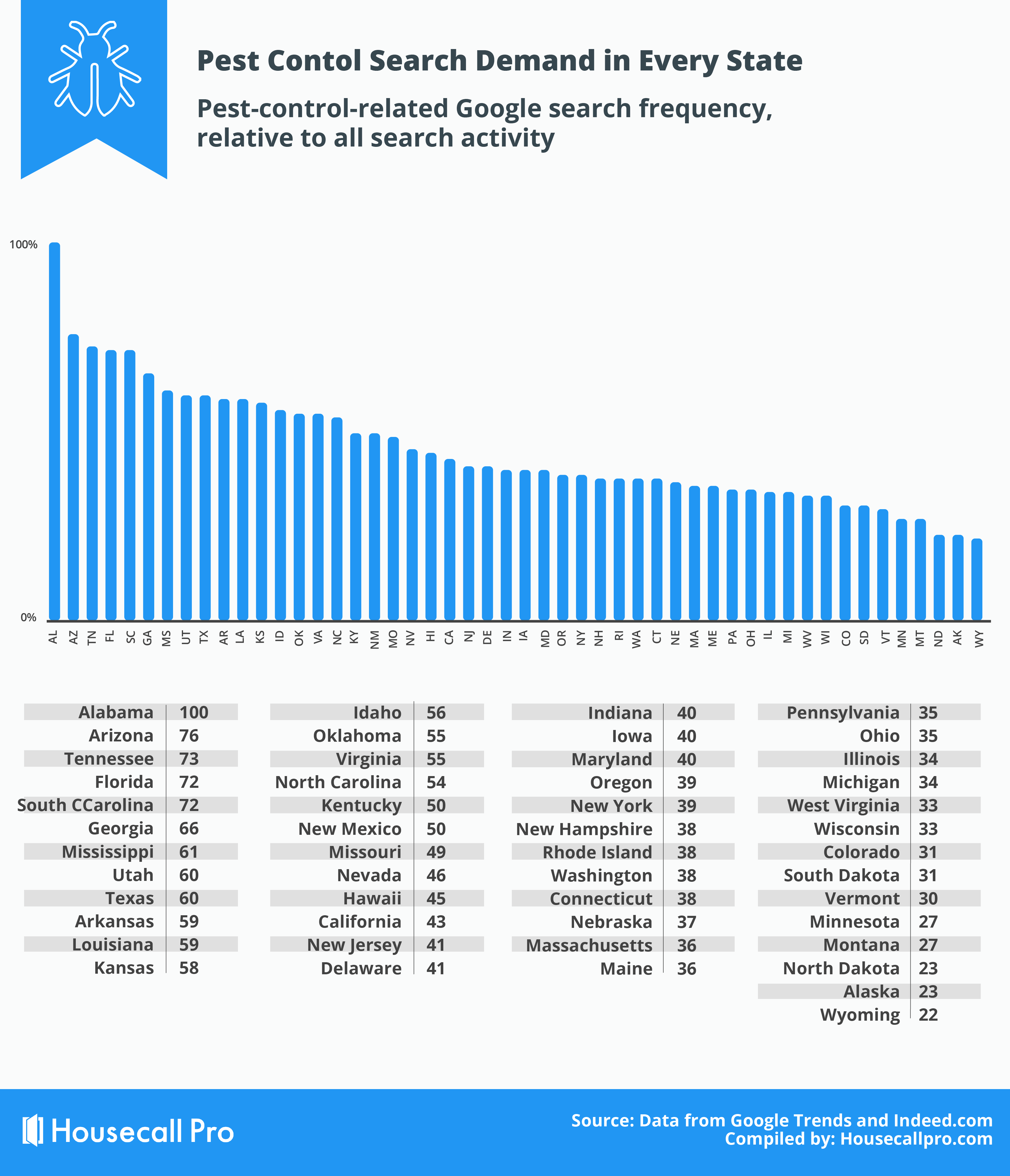 The state with the highest relative search volume for pest-control-related problems is Alabama.

The residents of Alabama are clearly having pest-related problems that must be dealt with. Pest control services are clearly in demand. Following Alabama are Arizona, Tennessee, Florida, and South Carolina. 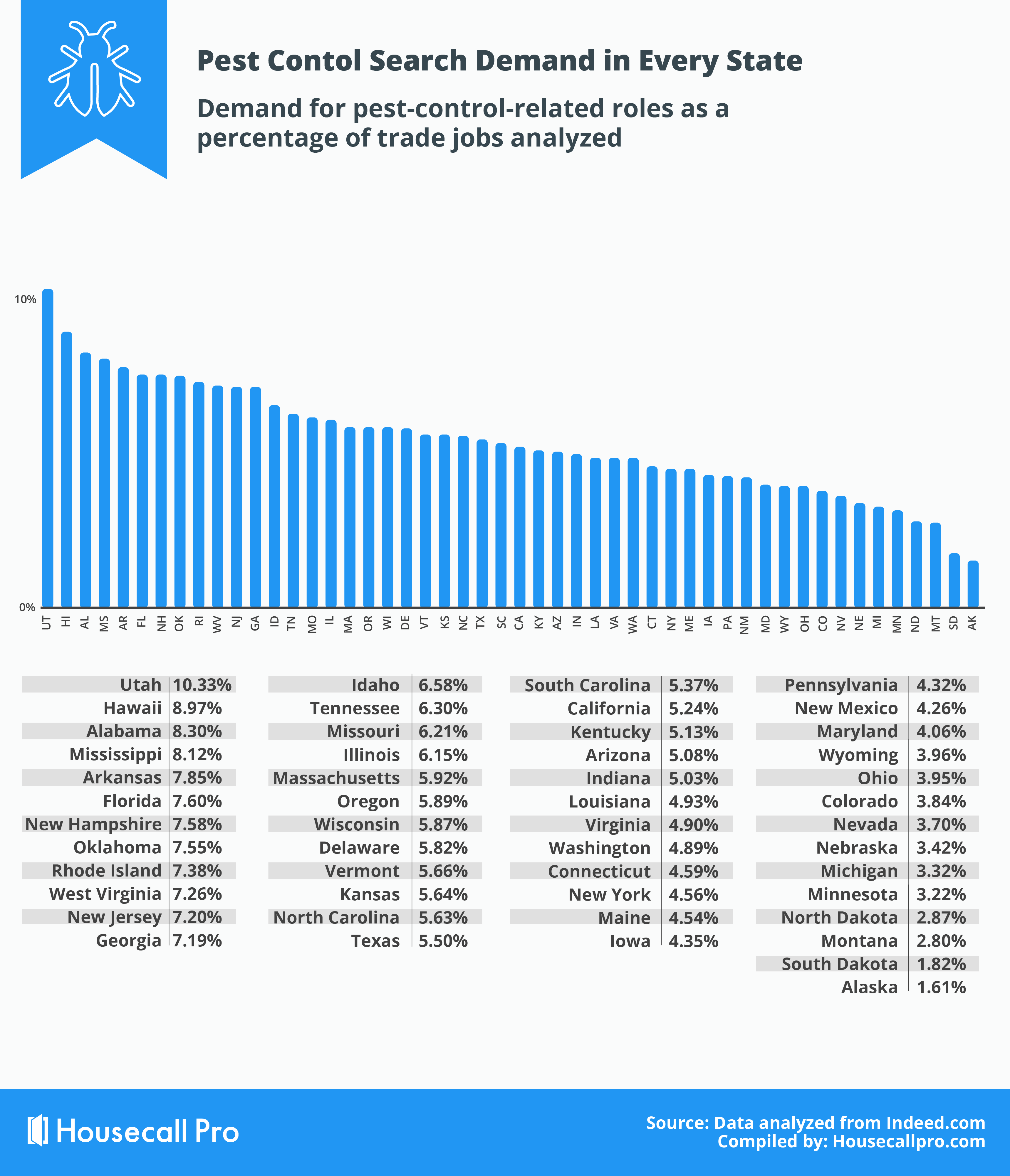 The state with the highest relative percentage of pest control jobs is Utah, at 10.33%.

The next four highest states are Hawaii, Alabama, Mississippi, and Arkansas. If you’re desirous of starting a trade, you may want to consider being a pest control technician in one of these states.

Finally, Alabama is the state with the highest final score

If you’re seeking a pest control job, Alabama appears to be one of the strongest states in terms of overall demand. Florida and Utah also have strong demand for pest control technicians. If you’re hoping to start a pest control business, consider those states along with Alabama.

Several things are abundantly clear from the above data. First, trades are thriving. Clearly, there is a strong need for electricians, plumbers, pest control services, and HVAC skills. If you want to get into any of these trades, now is a great time to start.

There are distinct differences between the states, with some states having significantly more demand than others. When evaluating the best place to start a job or build a business, consider a location where demand is sufficiently high.

The methodology used in this study combined 2 data sets to approximate the relative demand for each trade in each of the 50 U.S. states.

First, to estimate consumer demand for each trade, we analyzed Google search data using the

Rather than analyzing search trends for a specific keyword, we looked at trends around “Topics” that best represented each trade. These topics, according to Google Trends documentation, include a variety of related keywords that Google feels are closely associated.

In our analysis, we found that these topics represented a variety of topics that should be closely correlated with demand for the services.

For instance, when analyzing searches for the “Heating, Air Conditioning, and Ventilation (HVAC)” topic, we observed that many of the specific keywords included in the data were searches like “hvac repair near me” and searches for specific hvac companies across the country.

The data from Google Trends is both adjusted for overall search volume within the state (i.e., adjusted for population) and normalized on a 100-point scale.

The second dataset we used in our analysis came from data collected by Housecall Pro earlier this year. We analyzed job listings on the site Indeed.com to determine the popularity and pay rates of job listings for HVAC, electrical, plumbing, and pest control positions in each U.S. state.

For the analysis outlined here, we used this data in a slightly different way.

As an example, take HVAC jobs in Alabama:

This percentage was then compared to the percentage of jobs for the same trade in all other states to determine the relative demand for workers in that field in each state. For instance, using the same analysis, we can see that only 35% of jobs across these 4 trades were HVAC in the state of Alaska. Thus, according to our analysis, we would conclude that there is a lower relative demand for HVAC workers in Alaska compared to Alabama.

Again, because the data is based only on jobs data within that same state, the score we assigned should already be adjusted for relative population.

The “final score” represents both the relative search volume and the percentage of related jobs posted on Indeed. The score is normalized again on a 100-point scale and then weighted.

Because the Indeed jobs data included some listings that included duties related to these trades but may have not been fully representative of a full-time position within the industry, we felt that the data should be

In our final calculation, we weighted Google Trends data at 60% and Indeed jobs data at 40%.

How to Remove Vinyl Car Wraps (The Right and Wrong Way)